Published on In
Ocean's Eight

Hi everyone! We’re gonna wait more then a year and a half to see the spin-off of Ocean’s Eleven: Warner Bros just set the release date for Ocean’s Eight on June 8, 2018 , making the movie the first feature film (for Cate) scheduled for 2018. Also set for 2018 there are How To Train Your Dragon 3 and Jungle Books: Origins. – via Variety In a recent interview with Stephen Colbert, Mindy Kaling give us more informations on Ocean’s Eight and fangirl (a bit) on Cate Blanchett. Enjoy!

I invite you all to check this fan site on the movie https://ochowatch.wordpress.com/, from where I took the fan poster you see as fetured image!

Comments are off
Published on In
Knight of Cups Ocean's Eight

Hello dearests! After more than a year from the first cinematic screenings (September 2015 in Germany), Knight of Cups opened yesterday in Hong Kong (September 29th), and is set to open in Italy on November 3rd and in Japan on December 23rd. I know that with the official DVD release many of you have already watched the movie, but I urge everyone to support the movie and go watch it again in cinemas.

About the upcoming film Ocean’s Eigth, in the last few days several sites have reported that the movie starts shooting in New York on October 10th!

Thanks to Cafe’s fan for this article! 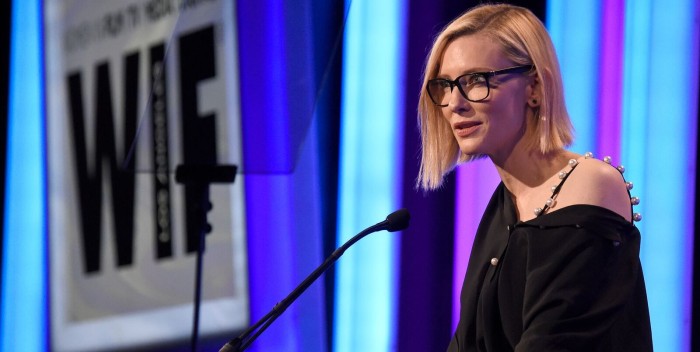 EXCLUSIVE We told you last week that Cate Blanchett had joined Gary Ross’s all female Ocean’s 11 heist movie with Sandra Bullock, Elizabeth Banks, Helena Bonham Carter and Mindy Kaling. But Blanchett told me last night at the Women in Film Crystal & Lucy Awards that it’s not a done deal.

“It’s in the air,” Cate said, “but it’s not done yet.  I’ve always wanted to work with Sandra, so I’m hoping it happens, but I truly don’t know yet.”

Blanchett was at the Beverly Hilton to honor the amazing Hylda Queally, her agent of 19 years, with the Sue Mengers Award. In giving the award, Blanchett said to Queally, “ I would be an unformed piece of amoebic jelly without you.” Cate never ceases to be classy, when actor/producer Kat Kramer introduced Cate to deaf actress Antoinette Abbamonte, who told Cate through sign language that she loved her work, Cate signed back thank you.

I spoke with Cate Blanchett about the Tonys, where she presented the award to winner Frank Langella.  “I love being a part of the New York theater.  Theater people are really circus performers in a sense, it’s real feeling of camaraderie.  Especially on that sad night.”

Hello! The movie has its official title, and it’s not Ocean’s Ocho…

“We’ll break the cast right now and blow up the Internet,” director Gary Ross joked after we mentioned Ocean’s Eight to him.

The director didn’t reveal to us the film’s entire ensemble cast, which has been previously reported or rumored to star Sandra Bullock, Cate Blanchett, Helena Bonham Carter, Mindy Kaling, and Elizabeth Banks. One thing Ross did tell us, however, is that his film is very much a continuation of the tone Steven Soderbergh established with his incredibly entertaining Ocean’s remake trilogy.

The rumored title for the Ocean’s Eleven spinoff was Ocean’s Ocho, but Ross confirmed to us that the title is Ocean’s Eight. Ocean’s Ocho was simply a nickname they had for the project.