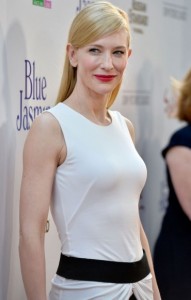 Revered in Hollywood for playing challenging roles like Queen Elizabeth, Katharine Hepburn (which she won an Oscar for), and even Bob Dylan, Cate Blanchett’s dedication to her craft is unparalleled. Which makes you wonder why it took so long for Woody Allen to cast her in one of his films. Thankfully we don’t have to ponder this any longer, as the 77-year-old director hands the Australian beauty one of his most complicated characters he’s ever written.

In Blue Jasmine, which opens in theaters Friday, Blanchett plays Jasmine, a former Manhattan socialite who after her husband (Alec Baldwin) goes to jail for fraud travels to San Francisco to stay with her sister, Ginger (Sally Hawkins). A time bomb ready to explode, Jasmine can’t cope with the simple life Ginger lives—or her choice of blue-collar men (Andrew Dice Clay, Bobby Cannavale, Louis C.K.)—and aided by vodka and Xanax tries to quiet the voices in her head long enough to find a new suitor.

Blanchett spoke to The Hollywood Blog about adapting to Allen’s notorious hands-off approach to directing, why playing someone like Jasmine can stay inside you forever, and the next marquee director she’s most excited to work with.

The Hollywood Blog: Had you ever met Woody before he offered you the role?

Cate Blanchett: No, I hadn’t met him. I had met friends of his, but no, we had never actually encountered one another. In fact, I had given up hope that he was ever going to ask me to be in one of his films, so I was thrilled when I heard he was interested.

As you mentioned at the premiere of Blue Jasmine, you had very brief conversations with him about taking the role, and then he just said, “See you on set”—

That’s when the terror begins.

Yeah, are you just filled with anxiety because you want to talk about the part with him?

Well, there has to be a dialogue, and the thing with Woody, I think, at least, 97 percent of his direction is in the script already. He gives you so many clues to mull over. I think the really important thing is the actors are all on the same page, and his films are always cast so interestingly, and this is no exception. I mean, Andrew Dice Clay! You talk about eclectic. It was really fabulous, and many of these actors in this film had done standup or theater, so there was a common language quite quickly between all of us. We obviously talked a lot about the subtext. And also, Sally and I were the only ones with the full script.

So Woody steps back and lets you all figure it out?

Yeah. But I’m personally someone who doesn’t know how to do it if I’m not in dialogue with other people, so I just asked him questions, and he was really forthcoming. There were certain things where I was talking about Jasmine’s name change or the fact that she was adopted that he didn’t necessarily delve into or think were unusual or interesting, but I found them interesting, so I just had to assimilate that.

The film has gotten a lot of comparisons to A Streetcar Named Desire, and you’ve played Blanche DuBois onstage.

That did come to mind, but we never discussed it. I’ve also played Richard II, which is really interesting, and obviously you don’t look at this film and think Richard II, but I was fascinated by the sense of who she perceived herself to be, who she thought she was entitled to be, and the journey of finding out who she actually is and what her situation is—it’s a fall-from-grace story. Except in this instance, in a lot of ways she’s the agent of her own downfall.

We didn’t talk about Streetcar at all. There are parallels to be drawn, but there isn’t the sexual dynamic between Chili and Jasmine, so it doesn’t pay off in that way.

By the end of the film, we’re exhausted by watching Jasmine’s journey. Was it draining to play her?

We shot the ending a couple of times because it was a longer scene initially and there were several parts to it, and in the end Woody just wanted to do it all in one take, so he went back and tweaked the writing a bit and we went and did it again. So I had thought I had gotten that out of the way and we had to go back into it. I was a bit worried about getting to the same place again. But the situations he creates are so strong I think the trickiest thing for me was calibrating her outbursts because she’s not only fueled by a cocktail of Xanax and alcohol; she’s also fueled by a cocktail or panic, rage and guilt, and all of that is encased in this fragility of a woman who has been betrayed. She’s a bundle of nerves, but when does that erupt? When is she unable to keep outward control of that? That was really interesting to play.

What do you use to get out of that headspace?

Well, my children were there, and they’re a great leveler. So it would be cooking them dinner and helping them with their homework. [Laughs.] And then getting them in bed in time for me to learn the lines for the next day.

We talked to Alec Baldwin earlier in the month and he said that you are one of the three greatest movie actresses alive today and being around you was like being on cocaine. That’s quite an endorsement.

[Laughs.] I don’t know if I’d want to be around Alec when he’s on cocaine. [Laughs.]

He’s been in many of Woody’s films. Was it fun to have scenes with someone who’s been there before?

It was. He knew the ropes. I loved it. I was hoping there would be more scenes with him, and we tried them various different ways. You could tell the moment Alec got on set that Woody really loved working with him.

You’ve played so many incredible characters in your career. Where do you rank this one?

I think when you’re given the opportunity to thrash it out with great roles—and having played Hedda Gabler and Blanche and Richard II, and I was just onstage doing The Maids—I think Jasmine is up there in terms of complexity and demand. Those characters stay with you; they stretch you. I just didn’t want to screw up Jasmine, because it was a brilliant creation by Woody. And you feel that when you play Blanche DuBois or Hedda Gabler because the challenges are so enormous. I do believe they stay with you.

Do you have a favorite female character from Woody’s films?

Looking forward, you’re very busy. You’re in two films directed by Terrence Malick, as well as films by George Clooney, Peter Jackson, Todd Haynes, David Mamet, and Kenneth Branagh. Which director are you most excited to work with?

Well, I don’t ever know if I’m in the Malick film. The one he shot in Los Angeles I was only on set for a few days, so who knows. But I’ve been attached to David Mamet’s for quite a while, so I’m really excited. It’s a brilliant script. I’ve literally just walked offstage, so at the moment all I want to do is get into my pajamas and bake. [Laughs.] 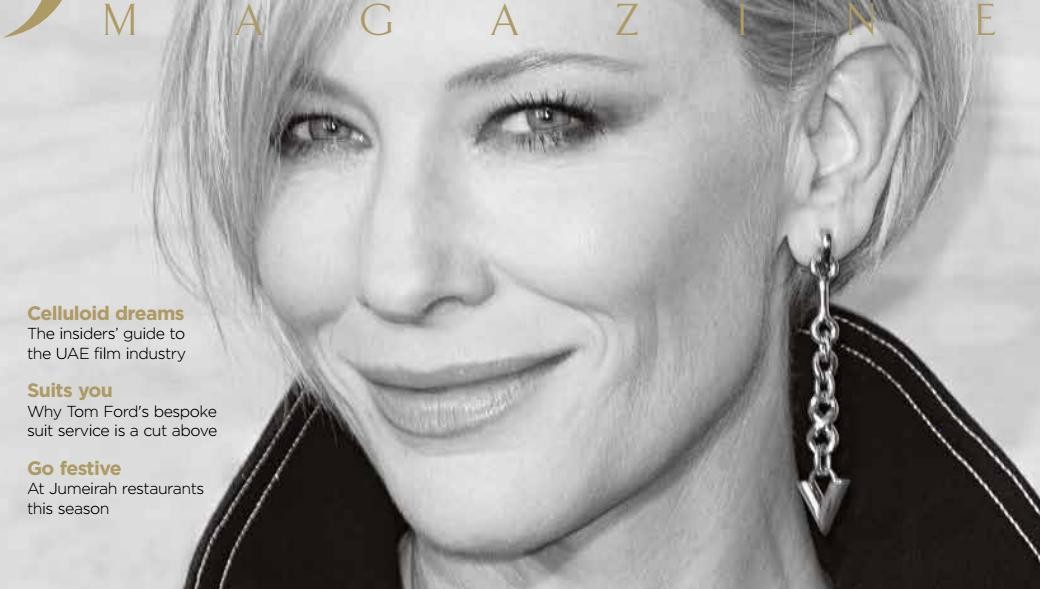