If this interview looks familiar, you are true Blanchetters. This is the third part of the an interview for Entertainment Weekly, recorded in November, during the American press junket for Carol.

Cate Blanchett is reluctant to talk about influences. “Because then I think people say, ‘Oh, I see… clearly you’re trying to emulate or imitate this person,’” the two-time Oscar winner explains.

But luckily she elaborated for this exclusive video for EW’s Pave the Way series, describing the ways in which a wide range of art and artists inspire her. Among the icons she name-checks: Lucille Ball (who Blanchett is scheduled to play in a biopic), Meryl Streep, Jane Fonda, Gena Rowlands, Miss Piggy, and Frank Thring.

Anyone who’s seen even one of Blanchett’s three juicy, dramatic roles from just last year — inCinderella, Truth, or her Best Actress-nominatedCarol — will somewhat understand, if subconsciously, her mentioning of Jim Henson’s voluptuous pink Muppet. But what about the last name on that chain?

“Oh, do you know Frank Thring?” she says with giddy delight at the mention of his name. Thring was a bald, obese Australian actor who Blanchett first saw in a theater production of The Mikado when she was 9. When his fake mustache fell off during the show, Thring growled, “Damn this Japanese merchandising!”

Little Cate was utterly mesmerized. “I certainlyremember the first time I saw him,” she says. Too young to understand his joke about the mustache, she nonetheless hooked into the unpredictable and dangerous wavelength he radiated onstage. That impulse awakened her desire to become an actor — and has informed many of the nervy, risky parts that she’s played, from Queen Elizabeth I to Bob Dylan.

Thring, who was openly gay and a regular raconteur on Aussie talks shows, died in 1994. To modern audiences, he’s probably best known for his supporting role as The Collector, the sidekick to Tina Turner’s Aunty Entity who gets whacked in the cajones by Mel Gibson in 1985’s Mad Max Beyond Thunderdome.

In her video, Blanchett describes herself as not being “made of such stern a stuff.” 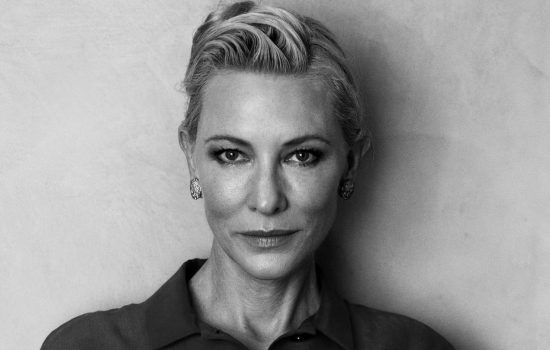 Cate Blanchett: “I want to spend more time being myself”