One new interview from SK-II event

At the end of the interview Cate confirms she will be in a Marvel movie!

Because who wouldn’t want advice from the two-time Oscar winner?

Cate Blanchett is in a league of her own. Whether it’s on the red carpet (did you see her Oscars gown?) or on screen, the Carol star knows how to own any scene. That was the case last week when the actress took part in SK-II’s Change Destiny event (Blanchett is currently an ambassador for the beauty brand) and spoke alongside YouTube guru Michelle Phan and Indonesian singer Anggun about the idea of changing one’s destiny, a theme heavily embraced in the label’s latest campaign.

Here, three life lessons we picked up from the two-time Oscar winner during the beauty forum

Before speaking on stage, a video starring Blanchett played for a room full of reporters. There, she expressed, “The moments in life where I’ve disrupted my sense of myself and other people’s expectations and limitations I’ve placed on myself have always resulted in the most fulfilling experiences.”

One of those experiences included the time her and her husband, Andrew Upton, were offered the opportunity to run the Sydney Theatre Company in 2008.

“I was incredibly excited and enormously fearful. A lot of people around me at the point in my life — I was at the high point in my film career — were asking, ‘What are you doing, going back to Australia to run a theater company?’ And I thought the only thing that would stop me from doing it is fear. The fear of the impact on my career, fear of if I’m going to fail and so that galvanized me actually,” said Blanchett. “As a result, the last eight years have brought the most profound change on not only on my career as an actor, I’ve become a better actor, matured — I hope — but on my life because simultaneously we ignited a sense of community back here.”

On learning by failure:

When asked by moderator Louise Roe on how she chooses her roles, Blanchett responded, “Frequently, my career has been roles that people have turned down. People think, ‘Oh they’re too small’ or their agents say, ‘Oh it’s not paying enough money’ or whatever. It’s interesting to talk about scale, large and small, and we’re talking enormous changes in all our lives. It often starts with [something] really tiny as you suggest. Like a lipstick. I love a challenge. A conversational challenge, not necessarily an argument but I like that leap into the void. And for me, you don’t learn a lot by your successes, you risk a lot by your failures.”

On not knowing what’s next but still having goals:

“I feel like I have an on button and an off button. And you know, I have four children. I feel in a way, I’m in a really exciting crossroads because I’m risking not knowing what’s next,” she said.

However, she does have other goals in mind for the upcoming year. “I feel like I want to shake my rhythm up a little bit and risk not knowing what’s coming next. That said, we’re taking a play we did last year to Broadway. I’m going to get fit this year, finally. I’ve looked after my skin for so many years but my exercise regime… I’m about to do a Marvel film so I feel I might want to develop a few muscles that have never been there before.”

via The Hollywood Reporter

The Guardian Weekend: Interview and photos
Promotional interviews for Cinderella 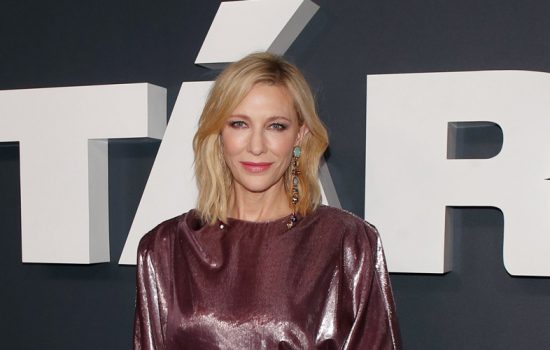