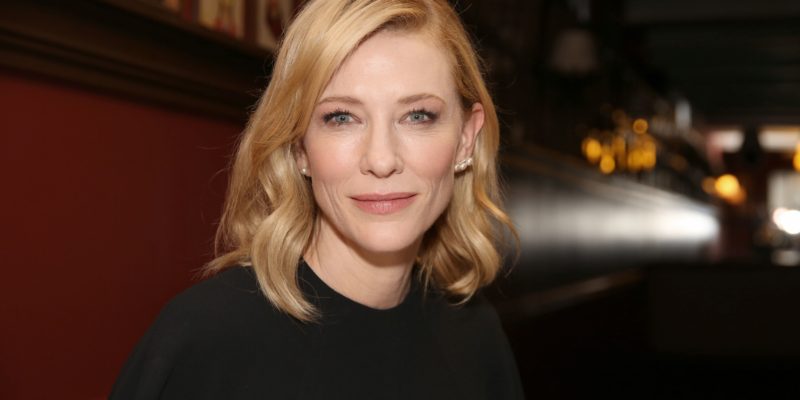 Exciting news for 2018! A new play with Cate Blanchett! Read more information below.

Baz Bamigboye of The Daily Mail has reported that Academy Award winning actor, Cate Blanchett, has signed on to play the role of Margo Channing in a stage adaptation of the classic film All About Eve.

The adaptation, which will be directed by Tony Award winner, Ivo van Hove is expected to arrive on the West End in 2018. The play will be produced by Sonia Friedman Productions and Fox Stage Productions. 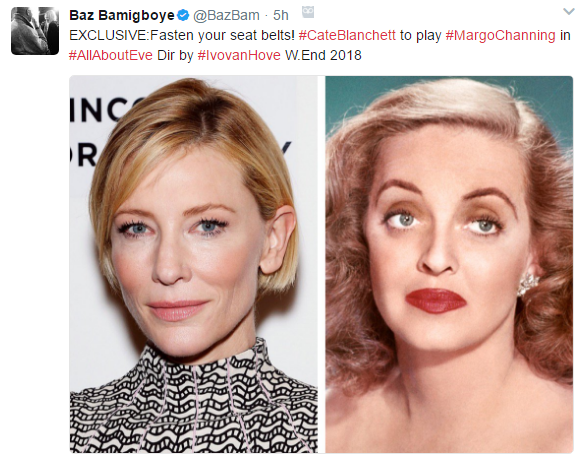 The 1950 film, All About Eve, is written and directed by Joseph L. Mankiewicz, based on the short story “The Wisdom of Eve,” by Mary Orr, and stars Bette Davis as Margo Channing, the prominent yet aging Broadway star. Anne Baxter plays Eve Harrington, a willingly helpful young fan who insinuates herself into Channing’s life, threatening Channing’s career and personal relationships. All About Eve was nominated for 14 Academy Awards and won 6, including Best Picture.

Cate Blanchett made her Broadway debut this season in THE PRESENT. Her other stage appearances include Plenty (1999), Hedda Gabler (2006), for which she received the Ibsen Centennial Commemoration Award, and Benedict Andrews’ epic production of The War of the Roses (2009), in which she played the roles of Richard II and Lady Anne. Other notable productions include Top Girls, Hamlet, The Tempest and Oleanna. Her film roles include Carol, Truth, Cinderella, The Monuments Men, Blue Jasmine, The Hobbit: An Unexpected Journey, Hanna, Robin Hood, The Curious Case of Benjamin Button, Indiana Jones and the Kingdom of the Crystal Skull, I’m Not There, Elizabeth: The Golden Age, The Good German, Notes on a Scandal, Babel, Little Fish, The Life Aquatic with Steve Zissou, The Aviator, Coffee and Cigarettes, The Missing, The Lord of the Rings trilogy, Veronica Guerin, Heaven, The Shipping News, Charlotte Gray, Bandits, The Gift, The Talented Mr Ripley, Pushing Tin, Elizabeth, Oscar and Lucinda.

Ivo Van Hove won the 2016 Tony Award for Best Direction of a Play for ARTHUR MILLER’S A VIEW FROM THE BRIDGE. As General Director of Holland’s leading theatre company Toneelgroep Amsterdam, Ivo Van Hove has staged many internationally acclaimed productions, including, in New York: Alice in Bed, More Stately Mansions (Obie Award), A Streetcar Named Desire, Hedda Gabler(Obie), The Misanthrope, The Little Foxes, and Scenes From a Marriage, all at the New York Theatre Workshop; Roman Tragedies, Cries and Whispers, Opening Night, Angels in America, and Antigone at BAM; and Teorema at the Lincoln Center Festival.

Thanks to Fab Cate Blanchett on Twitter for sharing the article.