Cate Blachett and her husband, Andrew Upton, attented the Sydney Theatre Company Pillow Talk, as a part of the Spectrum Now Festival, yesterday.

Can anyone compete with Hugh Jackman? Is watching The Mummy six times grounds for divorce? Can anyone recover from serving steamed broccoli and eggs on a first date? Is a buttery muffin the way to a man’s heart? On Sunday, Cate Blanchett and Andrew Upton, Richard Roxburgh and Silvia Colloca, Richard Glover and Debra Oswald and Wesley Enoch and David McAllister shared the stage for Spectrum Now’s Pillow Talk event. With a combined 72 years of romantic experience between them, they gave a glimpse into their lives together. So what can we learn from four of Australia’s most well-known creative couples?

Bum cracks do. That was the first thing Blanchett saw when she met Upton 18 years ago. Granted, his head was in an oven at the time (he was making a movie). While Glover’s bum wasn’t emerging from an oven, Oswald’s first thought was, “Oh, lordy, what a wanker” when they met at ANU in Canberra. A few weeks later he offered to paint her set (and no, that’s not a euphemism, it was the set of a play she was producing). For Enoch and McAllister, it was a friend who first tried to get the pair together: “A mutual friend who I used to stay with, had Wesley over for a drink and after he left, she said: ‘Wesley’s lovely, isn’t he?’ And I was like, ‘Are you trying to matchmake? Ew. He’s way too famous and fabulous for me’.”

2. Although sometimes they do

When Colloca arrived at the read-through for the film Van Helsing, she was confronted with a room full of incredibly attractive men – Hugh Jackman and David Wenham to name but two – when in walked Roxburgh. Like many women before her, it was lust at first sight. For Upton, once he removed his head from the oven, Blanchett told him a joke that he finds funny to this day (yeah, cheekbones and a sense of humour.).

“Hi, I’m Silvia. I’m your Italian wife”: Colloca introducing herself to Roxburgh for the first time (she was, after all, playing one of his three vampire brides).

4. And this is how not to flirt

“Greetings from sunny Sydney.” One of the “flirtatious texts” Roxburgh sent to Colloca while he was home in Sydney on a break from filming Van Helsing.

5. Cooking is not always the easiest way to a woman’s heart…

When Glover first invited Oswald over for dinner, he turned to The Vegetarian Epicure and served “disgusting sliced eggplant and steamed broccoli”. Thinking of a way he could jazz up the meal – no expense spared – he cracked two eggs over the broccoli. They have somehow been together for 34 years.

Roxburgh and Colloca had been dating for a week, when Roxburgh decided to invite her around for dinner – “It was always a winner when I cooked something in the dating process” – and she offered to help. After half an hour, Colloca had prepped all the ingredients of a dish she had never made before in a cuisine she was unfamiliar with (poor Richard, not every woman you offer to cook dinner for will go on to create a food blog, write several cookbooks and host their own cooking show).

7. Sometimes all it takes is a buttery muffin

McAllister: “Our first date was in Melbourne. We met up at a little cafe and we had buttery muffins.”

Enoch: “Why did you just say that?”

Enoch: “He says this story and says we had buttery muff. Don’t ever think that I’m the crude one!”

8. Romantic gestures don’t always have to be flashy …

They can also come in the form of wildflowers picked on the side of the road and tied together with used dental floss found on the floor of a ute (nice one, Glover).

9. They can come from Harvey Norman, too

Well, maybe if you are giving Blanchett a gift. In that case a vacuum cleaner makes a good second wedding anniversary present, followed over the years by a breadmaker, Mixmaster and sewing machine.

10. Working with your partner can be tricky…

When Roxburgh was filming the first season of Rake in 2010, Colloca was cast in an episode. He couldn’t look at her without seeing his wife instead of the character. She ended up having to stand out of his eyeline, making Roxburgh the only man in history to tell Silvia Colloca he couldn’t bear to look at her.

Blanchett and Upton have worked on scripts together in disabled loos or late at night in bed. For Glover and Oswald, working together at home means there is always a race to empty the dishwasher in the name of procrastination.

12. If you want something done, ask Upton and Blanchett …

Blanchett calls Upton “big picture” while he says Blanchett is methodical and fast-moving when it comes to decision making.

To go into K-Mart and buy wrapping paper. It will take him half an hour and he will buy a laminator instead.

Eighteen times (Enoch, I’m looking at you!). Or, if you are Upton, The Mummy, six times.

15. If you want to help Oswald write the next series of Offspring

Help her take the dog for a walk, it’s where she works out her problems. FYI: she also has a certificate in non-friable asbestos removal.

16. Be the captain of each other’s team…

Glover admires Oswald’s resilience for her ability to be long-term artist in Australia, while she admires his faith and support of her, which she says has kept her going (“We’ve been together for 34 years, and that’s the nicest thing she’s ever said to me!”). Roxburgh loves the authenticity of Colloca, while she is still blown away by the “sheer magnificence of the man I married”. McAllister respects Enoch’s ability to stand up and say things that other people won’t, and Enoch is moved by McAllister’s compassion and the depth of regard and love that people have for him.

17. But don’t be afraid to give feedback

Roxburgh: “If it’s a good relationship, it furthers you.”

Roxburgh: “Not really, though.”

18. Make each other laugh

Humour is the main currency in the Glover-Oswald house (“That’s the way to win our love”), while for Blanchett and Upton it’s about taking the work seriously, but not each other.

Blanchett and Upton say a shared spirit of adventure keeps them together. They have Stalin-esque five-year plans, which never come to anything, a bit like Stalin, really – boom, boom, with thanks to CB.

20. And don’t order Enoch’s peppermint tea for him …

“I’m a feminist, I can look after myself.”

A brief list of the next upcoming events Cate Blanchett will attend:

Cate Blanchett and her husband Andrew Upton are going to attend the Spectrum Now Festival on March 22, 2015. The tickets can be booked here 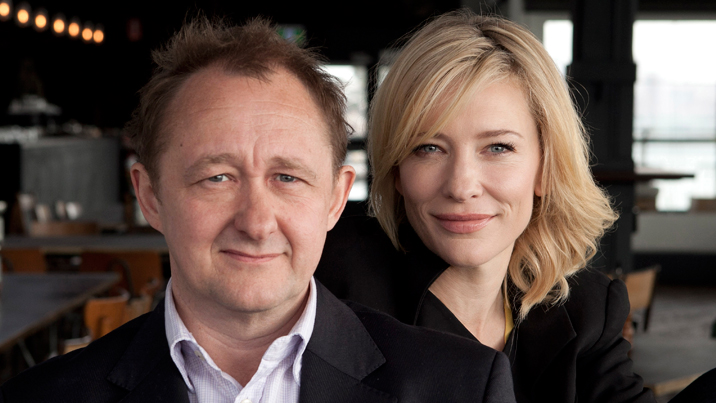 A highlight of the festival will be The Full Spectrum, a fiesta of talks, confessions, discussions and debate hosted by Fairfax journalists.