Welcome to Cate Blanchett Fan, your prime resource for all things Cate Blanchett. Here you'll find all the latest news, pictures and information. You may know the Academy Award Winner from movies such as Elizabeth, Blue Jasmine, Carol, The Aviator, Lord of The Rings, Thor: Ragnarok, among many others. We hope you enjoy your stay and have fun!
Published on In
Articles News

NEW YORK (Reuters Life!) – Oscar-winning actress Cate Blanchett says she is looking forward to trading the silver screen for the stage in her new role as co-artistic director of the Sydney Theatre Company.

In January Blanchett, 38, and her husband, writer Andrew Upton, begin a three-year stint heading the Sydney company where she began her career 13 years ago.

They are aiming to develop the ensemble, ‘green’ the building, and expand the appeal of theater.

While she has a clause that allows her to take out three months each year to pursue other projects, Blanchett said she does not have any film roles lined up for 2008 and will be concentrating on acting with the company.

She recently spoke to Reuters, while promoting her latest movie “I’m Not There,” in which she plays a male singer inspired by Bob Dylan.

Q: Does this change mean you won’t be acting as much?

Q: Who would you most like to work with?

A: “Where do you start! Ingmar Bergman has passed away unfortunately. I’d like to work with Geoffrey Rush again and Richard Roxburgh.”

Q: If your career ended tomorrow what film would you most like to be remembered for?

A: “That’s an impossible question to answer. I don’t watch them more than once so I tend to forget them.”

Q: What do you look for in roles?

A: “It’s rarely the character actually. It’s the components like who is directing, what other actors are in it. And increasingly with the children (she has two young sons) it’s the timing.”

Q: Did you always want to act?

Q: What are you looking forward to most about returning to Australia?

A: “To be honest, apart from being all back together again as a family — because Andrew’s been in Australia doing a play — it’s embarking on the Sydney Theatre Company obviously, the work there, I’m really excited.”

Video of Cate on Leno 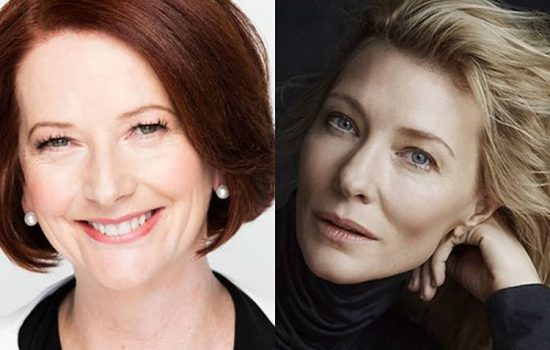