Cate Blanchett on ‘How to Train Your Dragon 3? and the Fear of Oscar Speeches

For Cate Blanchett, all roads these days lead to Oscar.

Last year’s best actress winner (“Blue Jasmine”) will be a presenter on Feb. 22. She will also be represented in the feature animation race, thanks to her voice work in “How to Train Your Dragon 2.”

And she landed that job at an Oscar ceremony.

When the 2010 “Dragon” was nominated, director Dean DeBlois approached her at the ceremony about doing a role in the sequel. As she told Variety, “He just walked up to me and said, ‘I’ve written a part for you.’ I thought, ‘Yeah, that is such a line…!’ But he had. He said she was a Jane Goodall-type of character who had spent her life with dragons. I loved the first film and had watched it about nine times with my boys. So my curiosity was piqued, and I thought, ‘How will they top that?’”

She’d done voiceover narration and “bits and pieces” in animation (e.g., two episodes of “Family Guy”), but this was new to her: It turned into a three-year job. “We met every six months or so. You go in and chip away at it for three years, as the animation evolves, and there were little shifts and changes in the story.”

She’s proud of the character and the film (“What an entrance! It was fabulous”) and is happy that the risks taken by DeBlois and his team have paid off creatively and at the box office ($619 million worldwide).

Her character will appear in “Dragon 3,” which is scheduled for 2017. “I am really excited. I don’t know what it’s going to be, but Dean has such an extraordinary imagination. And he directed in such a detailed, engaged way — he holds a firm grip on the universe.”

Before last year’s win as best actress, Blanchett had won the supporting prize for 2004’s “The Aviator” as Katharine Hepburn — the first performer to win an Oscar for playing an Oscar winner.

Daniel Day-Lewis presented the award last year, and Blanchett laughed when asked what went through her mind as he started reading the nominees. “It’s like being in a tennis court and watching the ball in the air: There is no thought going through your head; everything is just kind of blank.”

She said it was “an extraordinary bunch of nominees, and I was just pleased to be at the party.”

“It’s not a horse race, but it becomes that, because everyone likes to talk and speculate,” she added.

“Alongside the honor, there is apprehension and horror of making an acceptance speech in front of this group of people. There is no going back and doing a second take, no looping, no finessing. It’s what happens. It is like standup: It works or it doesn’t. It was scary, but I was excited by it.”

She said she’s too superstitious to have prepared a speech in advance; as for nerves, “I have an ability to tell myself, ‘No one’s going to see this,’” she laughed. Though she gave a terrific speech, she has no recollection of it. Asked if she will someday look at video of her speech, she gasped in mock horror, “No! Never!”

But she has only positive feelings about the Oscar experience. “Something like this doesn’t come along every day, and it’s great to be caught up in excitement. It was quite some ride.” 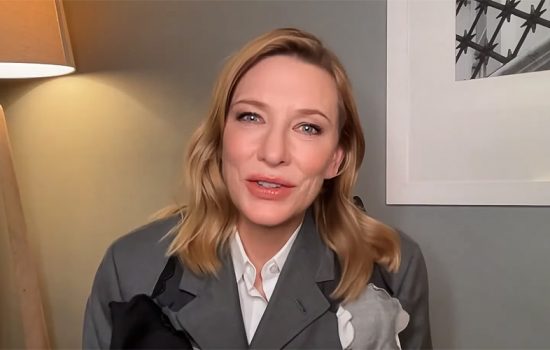