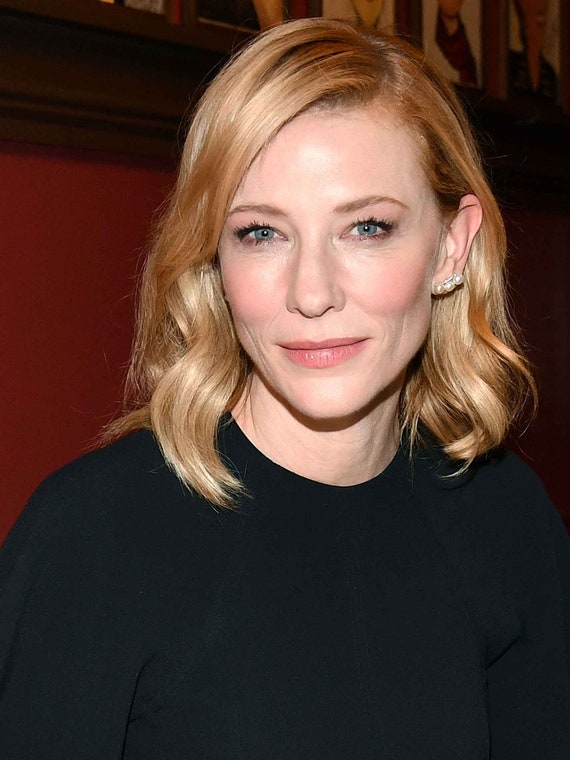 It’s not every day that a skin-care company crafts a product made specifically with you in mind. But then again, not everyone is Cate Blanchett. (A sad, but deeply true fact.) The 47-year-old actor, who has been the gorgeous, glow-y face of SK-II for 15 years, and was the inspiration behind the super-luxe Japanese skin-care brand’s recent Mid-Day Essence face spray, is still—if not more—in love with her beloved brand. As she tells Allure, it’s the reason her skin is the way it is today (again: gorgeously glow-y and virtually wrinkle-free), along with keeping a consistent routine, wearing lots of sunscreen, and letting the aging process, well, happen. Here, we’ve highlighted Blanchett’s best advice for obtaining skin like hers, which is, without question, the definition of immaculate.

How to Minimize the Appearance of Stretch Marks, According to Dermatologists
“I love clothes and the idea of changing your hair and what you’re wearing—but I don’t do that with my skin. It’s a very different thing. I think consistency is a big part of making your skin more resilient. Since I’ve been using SK-II—my skin has taken a lot of beatings being on stage, having four children, working in fil, and traveling—and I feel like it’s a lot more stable. And I can only attribute that to the consistency of using SK-II for a long time.”

“I’m eternally grateful that my mother always encouraged me to stay out of the sun and wear sunscreen [when I was growing up]. With very pale skin, it was especially important not to become a bronzed sun bunny. I think 90 percent of people who have issues with their skin—health-wise and also in terms of satisfaction with their complexion—are actually talking about sun damage.”

3. Don’t give into the pressure.

“I’m not a model, and I certainly was never the gorgeous girl in school. So I never thought about myself in terms of my looks. My looks have been a tool rather than the end result. They’re part of who I am, but they’re not all of who I am. I feel much more pressure to do my job properly, which is to tell the story and create an interesting character. That’s what I feel the pressure to do—look like the character versus look younger. It’s a high road to nowhere, really. The only thing you can do is look the best you can. The rest is invisible people talking on the internet—and I don’t really listen to that.”

“I mask on the plane, but I wait until the lights go off. Although, sometimes I’m so desperate I can’t wait, so I’ll put an eye mask on and the SK-II Facial Treatment Mask. But, up until recently, I was decanting the Facial Treatment Essence into a spray bottle, but now they’ve come out with [the Mid-Day Essence], so I’ll take that on the plane with me.”

“I’ve always been big on the vitamins my children take, but I was erratic on my own, so now I’m trying to fix that. That’s my promise to myself this year—I’m going to be much more regular. I’ve just started taking a liquid skin vitamin, called Aethern Advanced Skin Beauty Program. I’ve already noticed my skin is a little brighter.”

6. Don’t give into the pressure.

“I’m not a model, and I certainly was never the gorgeous girl in school. So I never thought about myself in terms of my looks. My looks have been a tool rather than the end result. They’re part of who I am, but they’re not all of who I am. I feel much more pressure to do my job properly, which is to tell the story and create an interesting character. That’s what I feel the pressure to do—look like the character versus look younger. It’s a high road to nowhere, really. The only thing you can do is look the best you can. The rest is invisible people talking on the internet—and I don’t really listen to that.” 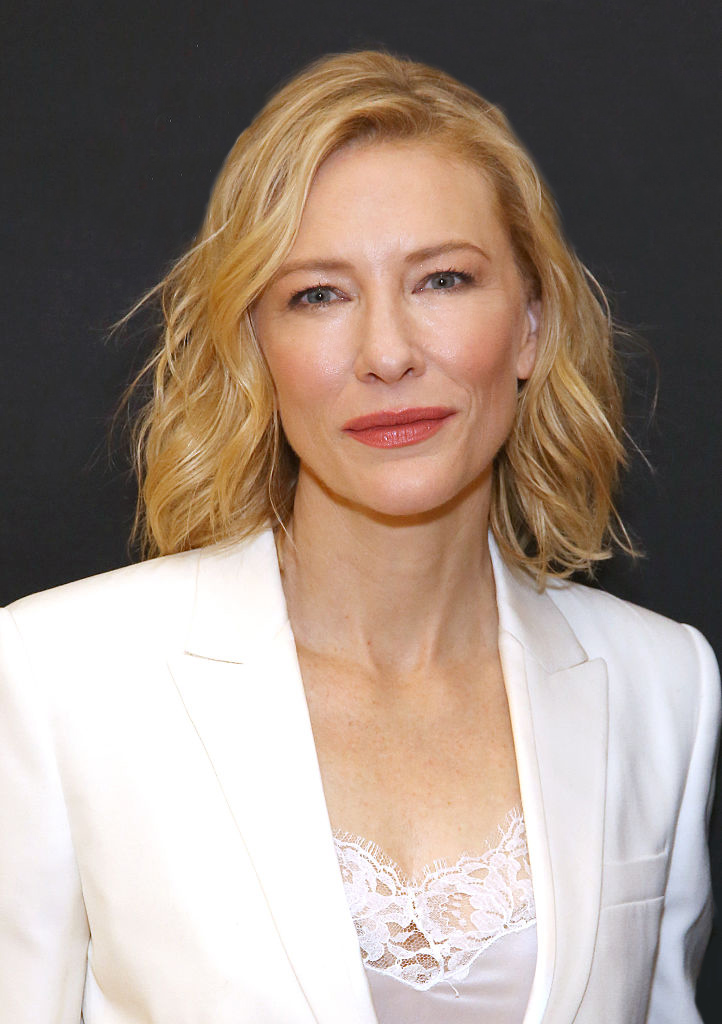 There’s age-denying. There’s age-defying. And then there’s Cate Blanchett, the two-time Oscar winner who defines what it means to own your beauty.

The mother of Ignatius, Dashiell, Roman, and Edith Upton doesn’t sweat all the bells and whistles that come with being famous. When she was eight months pregnant, she was fitted for her Dries van Noten Oscars dress in 2008 in just one quick session — and killed it on the red carpet.

During a BAFTA pre-Oscars event years ago in Hollywood, Blanchett laughingly showed off one of her tattoos — located in a hidden spot. Workwise, she vacillates between stage (co-starring in The Present, written by her husband, Andrew Upton) and screen, where she just wrapped the lady-heavy Ocean’s Eight, co-starring Mindy Kaling and Sandra Bullock.

“I got to work with those fabulous ladies. I was so excited to be working with them. I wasn’t prepared for how much I would be madly in love with them all. It was an amazing experience,” she says.

Her work speaks volumes, but her face tells a whole other story. Blanchett is the spokeswoman for the luxe brand SK-II, a skin care partnership that happened organically more than 15 years ago. Mary Greenwell, Blanchett’s longtime makeup artist, introduced her to the Facial Treatment Essence, which cleared up her skin when Blanchett was going through a rough spell. She’s been swearing by the brand ever since, and is currently promoting the SK-II Mother’s Day Limited Edition Facial Treatment Essence.

“That’s the cornerstone of the whole brand. I started using the product when I was pregnant with my first son, who’s now 15 going on 16. I started to notice changes in my skin. I was getting a bit of melasma,” she says.

She’s referring to patchy skin discoloration that can occur on the face, often during pregnancy. Today, says Blanchett, “My skin is in better condition than when I was in my early 30s. I have a clear, simple morning and evening ritual. I use the essence, and I generally use the LXP Ultimate Revival Serum and LXP Ultimate Revival Cream. I’ve been working with [the brand] officially for about 13 years. I wish I’d discovered it in my 20s.”

Blanchett embodies inner beauty, focusing on the interior, as opposed to the exterior. Aging, she sums up, is going to happen anyway, so why shun it? “You can’t run from it. There’s a level of scrutiny around the way women look, and it’s really unhelpful. Everyone will have a different relationship to their looks.” 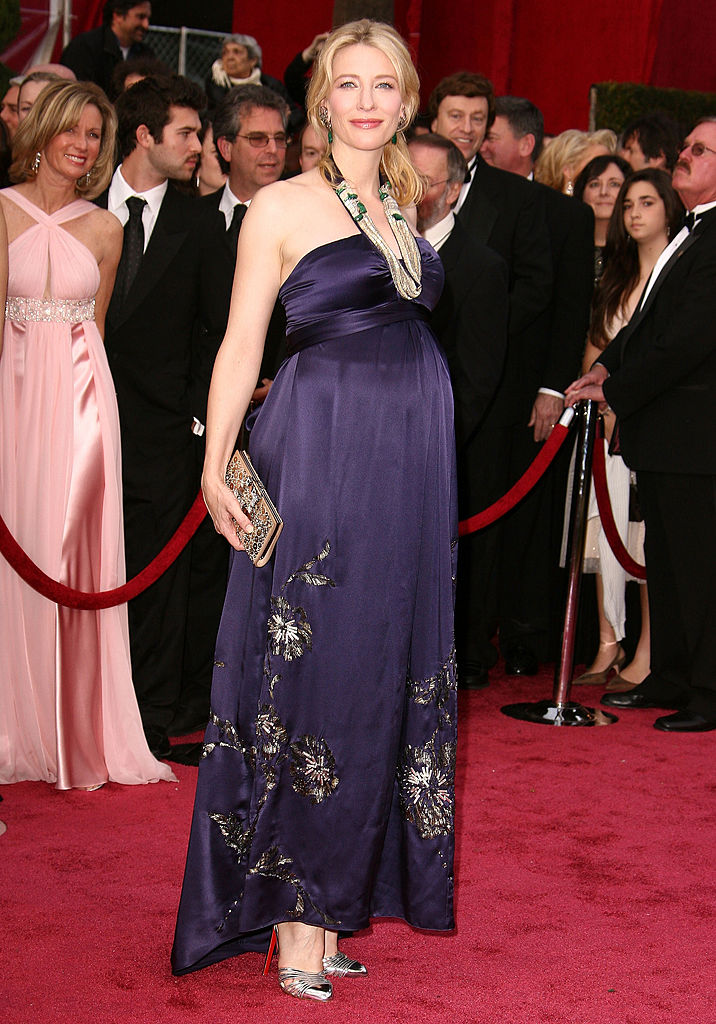 She obliquely refers to plastic surgery and her aversion to it: “I didn’t grow up in an environment where the older women did that stuff. It doesn’t sit comfortably with me. Work with what you’ve got. Otherwise, no matter how much you try and change yourself, if you feel panicked, it will radiate through. I wear less makeup now than I did in my 20s. I stay out of the sun.”

Yes, but she’s also down for a libation when life calls for it. “One always looks better when you don’t drink coffee or when you’ve done a detox. Life is stressful, and sometimes it’s easier to have one glass of wine than do eight yoga classes. Life is never perfect. You have to do the best you can,” says Blanchett.

She’s passing the same lesson along to her daughter, Edith. “Maybe it’s because I’ve had three boys. I wasn’t done having children. I kept all the boys’ clothes. So she’s wearing the boys’ clothes. Once again, that’s how I grew up. I grew up just being. It doesn’t matter what she wears. It’s about who she is, not what she looks like.” 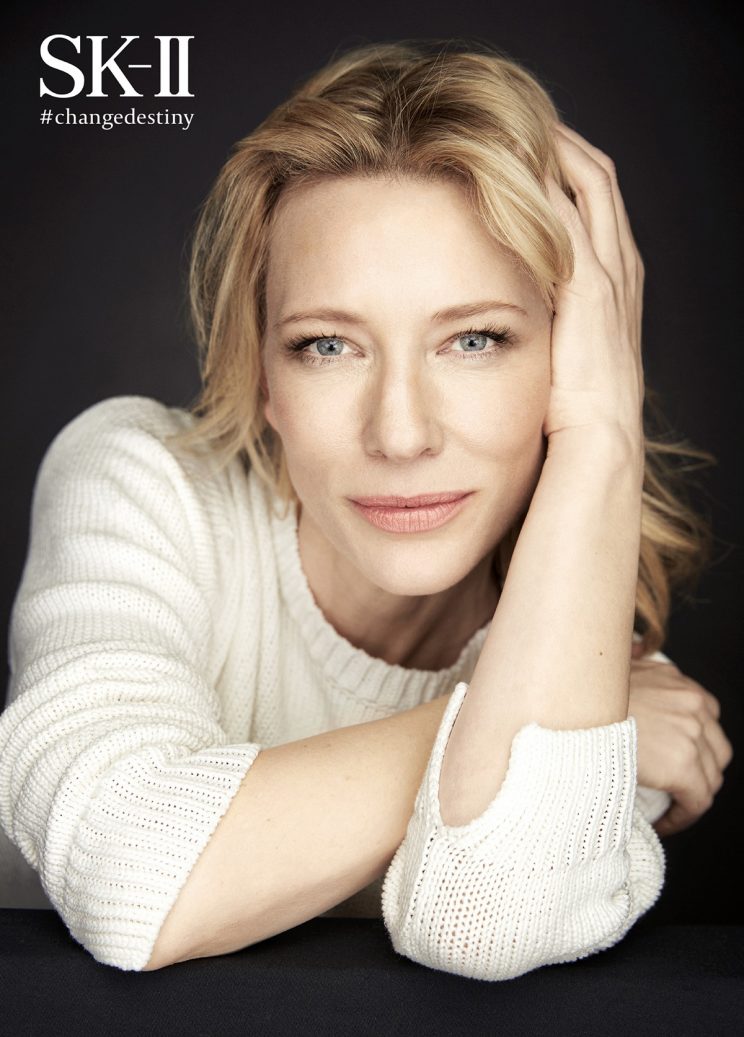