Welcome to Cate Blanchett Fan, your prime resource for all things Cate Blanchett. Here you'll find all the latest news, pictures and information. You may know the Academy Award Winner from movies such as Elizabeth, Blue Jasmine, Carol, The Aviator, Lord of The Rings, Thor: Ragnarok, among many others. We hope you enjoy your stay and have fun!
Interviews Magazines

“It’s not a great role in the original writing. It’s very peripheral,” Blanchett told us over the phone. “Andrew has set her given circumstances, for want of a better phrase, as the framework for the play, in which everyone combusts and decomposes and hopefully emerges crisp and more phoenix-like. For me, in the end, the role is always secondary, whether it’s working on-stage or on-screen. It’s about the people you’re working with. I was drawn to the possibility of doing this in Sydney, and then ultimately [to] the opportunity of performing it [in New York], as a way of exposing the actors that we work with, the designers that we work with, the creative teams that we work with at the [Sydney Theatre Company] to an international audience.”


Still, Blanchett seems to be enjoying her time treading the boards in New York again, making her Broadway debut after taking other shows to the Brooklyn Academy of Music and Lincoln Center. Blanchett is one of a small handful of movie stars who regularly does theater—Jake Gyllenhaal, currently starring in a swoon-worthy Sunday in the Park with George revival a few blocks north of Blanchett, is another one—but Blanchett doesn’t have any sort of ratio or equation in mind when accepting a film role versus a theater role. “There’s never really a plan,” she told us. “Except to do the work that I feel I can do. Sometimes it’s stuff where you can see an opportunity to do something, or to work with a director. Anthony Minghella on Talented Mr. Ripley. Lasse Hallström in The Shipping News. [Those roles] were very colorful characters, but I was working with two directors that I really wanted to work with, and on material that was the antithesis of the job that I’d just done. I could see an opportunity there. So often it’s been something that other people turned down!”

Are there any specific theater roles that Blanchett would carve out time for? “I wouldn’t mind a crack at Richard III,” Blanchett told us. (Someone please make this happen.) “But it depends on the director. There are plays that I would love to be part of realizing, but in the end, there’s no point playing Hamlet or Medea or Richard III or whatever the role is—or one yet to be written—unless you’re in something that is whole. Hamlet doesn’t make sense if Claudius and Gertrude aren’t present and completely enmeshed in the fabric of the piece, and therefore the production doesn’t work. I’m more interested in productions that have a chance to connect with the audience than how many lines I’ve got or how much stage time I have. I couldn’t be less interested. I don’t want to sound too pretentious about it, but I consider myself, no matter what the role is, an ensemble member.”

Blanchett will be an ensemble member in next year’s Ocean’s 8, a spin-off/continuation of the popular Ocean’s franchise, which she filmed on Mondays when not performing on-stage. But for now, there is just, quite fittingly, The Present, which runs on Broadway through March 19.

Sneak peeks from the next Lead Actress Roundtable 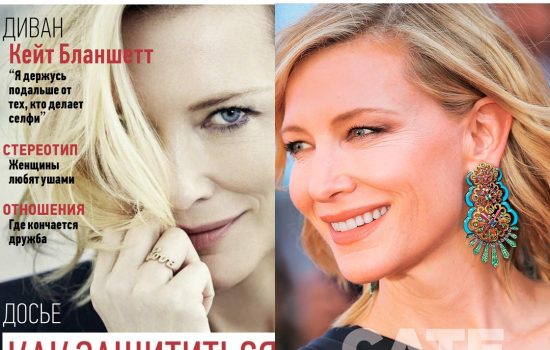