Welcome to Cate Blanchett Fan, your prime resource for all things Cate Blanchett. Here you'll find all the latest news, pictures and information. You may know the Academy Award Winner from movies such as Elizabeth, Blue Jasmine, Carol, The Aviator, Lord of The Rings, Thor: Ragnarok, among many others. We hope you enjoy your stay and have fun!
Interviews Ocean's Eight Thor: Ragnarok A new interview with WWD, published by the Los Angeles Times. Enjoy! 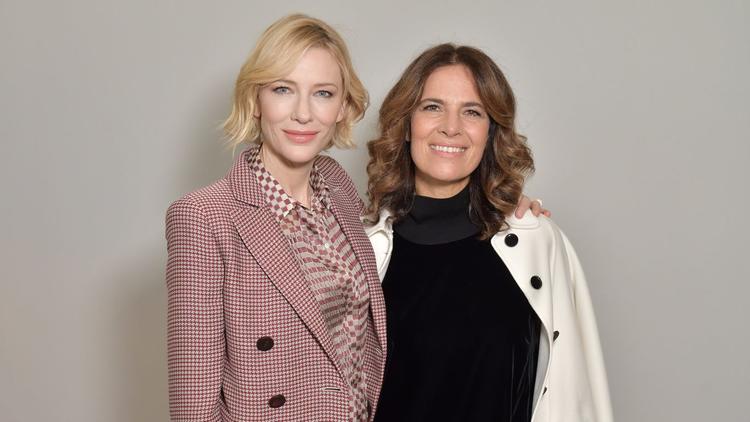 As Princess Charlene talked about the environment with Livia Firth, founder of sustainability consulting firm Eco-Age, WWD caught up with Blanchett, the face of Armani’s Sì fragrance, to discuss the growing power of women in film, her new “fruit loop” costar, and flexing her muscles on the “Thor: Ragnarok” set.

WWD: There is a lot of excitement around the all-female “Ocean’s Eleven” spin-off “Ocean’s Eight,” in which you star opposite the likes of Sandra Bullock, Anne Hathaway and Dakota Fanning. What was your favorite thing about working on the project?

Cate Blanchett: Just in relation to female-driven content. I mean, women are over half the audience and have been for decades and decades and decades, and I think there’s a critical mass of women working in the creative industries now, and not just in front of the camera, but behind the camera. I think that there’s much more collaboration, proactive collaboration happening, rather than a passivity that perhaps was there before, thinking that if women worked within the system as it was, that somehow we could reach audiences and our work would be recognized. I think that time has long passed, and it’s so exciting to see in so many different countries, across so many different media, women finally sort of sitting in the hot seat and putting themselves on the line. And I think it really pays off, because women want to see stories about women, and so do men.

[The success at the Emmys of] “Big Little Lies” and “Handmaid’s Tale” [is a] case in point. They’re just great television, full stop — and they happen to have women in control of a lot of those elements.

The cast was the huge draw for me; I mean, it couldn’t have got a greater bunch of women. We didn’t have a female director, but you know, Gary [Ross] loved everybody, and we’ll see what happens. There was a great energy on set. I would do anything with those women.

WWD: You also appear in “Thor: Ragnarok” opposite Chris Hemsworth as Hela, the goddess of death. So is she hellish?

C.B.: Well, we’ll have to wait — but yeah, it was a ball making it. Unfortunately, I didn’t get a lot to do with Tessa Thompson, who I think is absolutely brilliant, or with Mark [Ruffalo], whom I adore, but working with Chris and with Taika [Waititi] – who’s a kind of fruit loop with gravitas, I think, is the best way to describe him — it was so much fun. And I got fit for a nanosecond.

WWD: Did you have to work out like a beast?

C.B.: I did. I worked out with Chris’ trainer for 20 minutes a day, which sounds like not much, but my God, was I exhausted!

I was well outside my physical comfort zone, so it was very exciting.

by MLS
Comments are off