Welcome to Cate Blanchett Fan, your prime resource for all things Cate Blanchett. Here you'll find all the latest news, pictures and information. You may know the Academy Award Winner from movies such as Elizabeth, Blue Jasmine, Carol, The Aviator, Lord of The Rings, Thor: Ragnarok, among many others. We hope you enjoy your stay and have fun!
Published on In
Events General 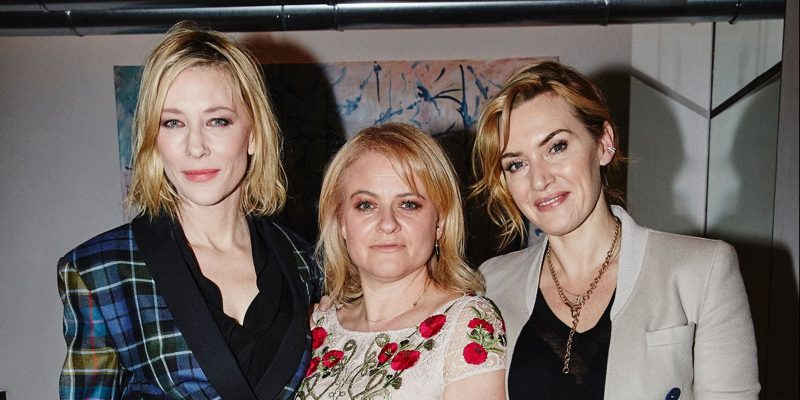 Yesterday, Cate attended a dinner in London to celebrate the opening of Nicola Clarke salon in partnership with John Frieda. Read more about it below! The soft leather chairs have been temporarily moved out, pretty Flora Starkey flowers adorn the table, Diptyque candles flicker gently. It’s a freezing cold Monday evening and downstairs in the basement of a newly-opened hair salon, colourist and stylist Nicola Clarke is having a few friends over for dinner. Cate Blanchett sits just to her left, next to Sam McKnight and make-up artist Mary Greenwell; Paloma Faith is just to her right; meanwhile opposite her is the finance executive Cathrin Perrin, and make-up artist Lisa Eldridge and hair stylist Kerry Warn. Madonna is away but sent a special playlist for the evening. This is a small and intimate affair, so when Paloma pings the glass in front of her with a gold spoon, silence falls quickly.

“This is the salon whose look I’ve been the least involved in, and it’s the one I like the most,” says John Frieda, Clarke’s partner and mentor. Famous for (among other things) spotting talent and nurturing it, one of the signatures of Frieda’s salons in the 40 years since he first opened his own has been the collaboration with key artists. We’ve had John Frieda and Sally Hershberger in Los Angeles, John with Orlando Pita, and currently in New York, Serge Normant.

“I felt that in London it was important to have someone of that stature,” he explains, “and I’ve been saying to Nicola for years, “Come on, let’s put that name above the door! And understandably – after all she has a young family and isn’t someone who is comfortable promoting herself – there was some reluctance, but finally we got there and it’s great!”

For those used to the Mayfair salon with its elegant cream marble, the Margaret Street Nicola Clarke at John Frieda salon – which was designed by Clarke with the help of Frieda’s wife Avery Agnelli and architect Ralf Eikelberg – is very different. Chrome shelves, polished concrete floors, and soft leather seats feel sleek and modern set within a refined palette of muted grey-greens and black steel beams.

“John would come to the meetings and try and get some marble in there, and I’d say: “no marble! Concrete! Concrete!” laughs Clarke, who started in the world of hairdressing with a Saturday job at a local salon in Billericay, aged 13, before landing an assistant’s job with Sam McKnight. She has been the regular colourist for Kate Moss for over 20 years, and has also coloured the hair of Gwyneth Paltrow and Madonna, as well as styling and colouring the hair of Cate Blanchett, Kate Winslet, Sienna Miller and Kate Bosworth for red carpets the world over as well as being the creative colour director at Color Wow.

But talent alone isn’t enough to command such a turnout on that freezing Monday night – it’s her genuine warmth, kindness, and sense of humour that garners her so much affection. “Everyone I’ve invited tonight is inspirational to me, and I’m thrilled you’ve made it out tonight,” she says to the 20 or so smiling faces around the table.

Nicola, wild horses wouldn’t have kept us away.

“I feel like I’ve known Nicola forever. I mean obviously I met her first as a colourist, but now I work with her in her capacity as a hairstylist too, and we’ve hung out together a lot. She is incredibly fluid and amazingly humble. It’s her talent that has led her to this point opening her own salon – and not some kind of PR machine – and everyone is really proud of her. She is a fantastic collaborator – I mean, I’ve worked on shoots for example, for Armani, and she’s happened to be in town and she’s assisted people, just picked up the hair brush and helped out. She has had an eclectic career and sometimes people think you have to be pushy or a diva to have that, but she’s the most wonderful antidote to all that. Plus she’s fantastic to be on the road with – she’s so connected to her family life, as am I, and she’s affected by politics, so you can have really robust conversations with her.”