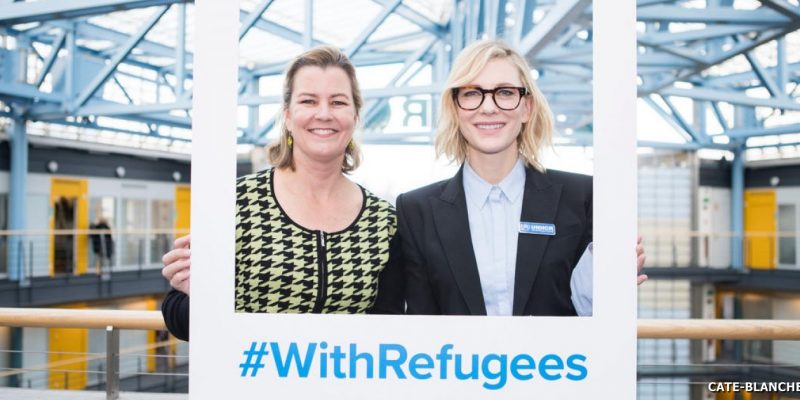 To mark the day when the whole world is celebrating women’s achievements and pressing for further progress in gender parity globally, UNHCR Goodwill Ambassador Cate Blanchett met with the UN’s Deputy High Commissioner for Refugees Kelly Clements to discuss her role as one of the world’s most high profile advocates for refugees.

Both Blanchett and Clements shared personal stories of meeting female refugees and the inspiration they have taken from women who have been forced to leave everything behind in search of safety as well as those who make great personal sacrifices to help them.

These personal accounts come at a time when more women are fleeing danger than ever in recorded history and often face the greatest risks of violence, exploitation and denial of their basic rights. The situation is particularly pressing for girls’ education where girls are only half as likely to enrol in secondary school as their male peers, even though they make up half of the school-age refugee population.

The Deputy High Commissioner was also asked for her advice to young women seeking to follow a similar career path to her and urged them to be hungry and seize all opportunities given to them, particularly working directly with refugees in the field.

The film is the first in a series featuring UNHCR Ambassadors and supporters to show the female face of the refugee crisis and will be followed by others directly from refugee communities. Both women ended the video by calling on everyone watching to support UNHCRs #WithRefugees campaign for International Women’s Day

Special thanks to CBF Chat members for sharing this news!