Ocean’s 8 premiere is just around the corner and we have been getting new daily content; Warner Bros Korea released a new trailer and poster. We have added the caps and poster to our gallery. We also got our first view of Lou’s MET Gala outfit; The jumpsuit was designed by Givenchy and inspired by 7o’s vintage rock glam. It was specially made for Cate. A lot of promotion videos keep coming out; CGV Korea released a new fun clip and Youtuber Rosa van Iterson Pottorff sat down with Sandra, Awkwafina and Cate to talk about the bonding between the girls. If you find yourself in New York City, you might want to attend the Cartier Jewelry exhibition with Jeanne Toussaint necklace’s replica created by Cartier for Ocean’s 8 along with other pieces. The Collection will be on display from May 25th to June 8th.

You are invited to see the Jeanne Toussaint necklace, a spectacular High Jewelry replica created by Cartier for Ocean’s 8, and explore the Cartier Mansion, which became the location of significant scenes throughout the film. Anne Hathaway, as her character, Daphne Kluger, captures the world’s attention when wearing the impressive necklace to the Met Gala in the film.

The necklace is a tribute to Jeanne Toussaint, Cartier’s Creative Director in the 1930s whose role was decisive in establishing the Maison’s stylistic identity. Above anyone else, she was the first woman to embody Cartier’s bold and fearless spirit.

And last but not least, we have news on Ocean’s 8 London premiere; according to The Sincura Group website, the film will have it’s premiere on Wednesday June 13th at an un-confirmed location in London. 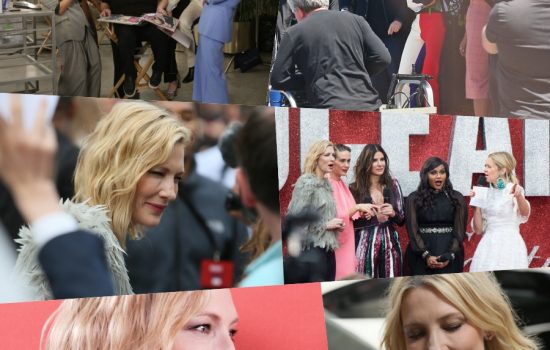