A couple of days ago the UNHCR, United Nations High Commissioner for Refugees, launched its new social campaing called Everyone Counts, born at the end of the very first Global Refugee Forum.

“At the start of the Global Refugee Forum today, we stand at a pivotal moment in history. UNHCR is urgently calling for increased commitment and support that will help every refugee – and the communities they are living in – to not just survive, but to thrive,” said UNHCR Goodwill Ambassador Cate Blanchett.

“Communities themselves stand to benefit by providing opportunities for refugees. Whilst we look to global leaders meeting in Geneva this week to renew and remake commitments, everyone has a role to play in supporting refugees; to access education, employment and safe living conditions. Everyone counts, every voice, every action – however small – can make a difference. We all have a positive part to play. Let’s seize this opportunity.” Cate also had a chat with Syrian refugee and business woman Razan Alsous, whom she talked to about her most notorius achievemnet…cheese selling. 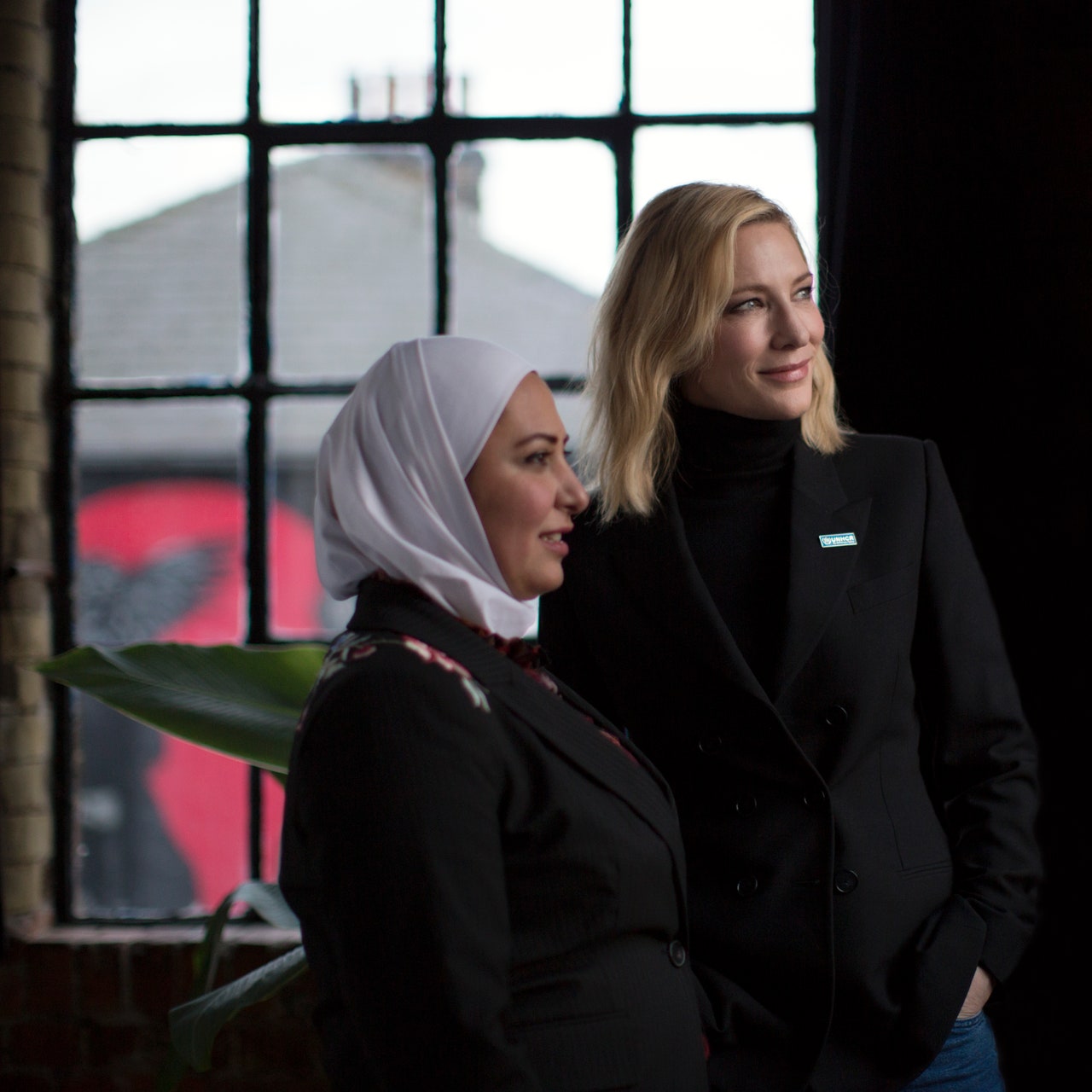 “People think that refugees arrive with their suitcase in hand when they move to a new country. But they bring so much more.” These pointed words have stayed with me. They come from an extraordinary Syrian woman I recently met called Razan Alsous, who happens to be a refugee. Now living in the United Kingdom, Razan has most certainly brought more to this country than her suitcase.

It was my great privilege to encounter Razan in my role as Goodwill Ambassador for the UN Refugee Agency, UNHCR. Together with her husband and three children, she fled the violence in Syria seven years ago. Grateful for the safety that she and her family found in West Yorkshire, Razan naturally turned her attention to rebuilding her life and resuming her career as a pharmacist. However, like so many refugees, she found that transferring her skills and work experience to her host country very difficult. With a young family to support and the desire to stand on her own two feet, Razan wracked her brains. What could she do? How could she contribute? What could she offer?

People in the UK seemed to love the halloumi that for Razan conjured memories of her home in Syria. Despite having no experience in cheese-making, Razan forged ahead into this niche market. With support and mentoring from the local community and a modest business grant, she set up her own halloumi company called Yorkshire Dama Cheese – a company which melds Syrian cultural heritage with the proud traditions and creamy produce of Yorkshire. Now in its seventh year, it is a hugely successful and multi award-winning business which provides employment to local residents and whose new factory was inaugurated by HRH Princess Anne.

As extraordinary as Razan’s story sounds, it is not that unusual. When refugees flee their homes because of conflict and persecution, they all carry intangible yet essential things with them, including their education and technical qualifications, along with their unique experiences, perspectives and potential. It’s a terrible waste of human capital when this potential and this agency remain unrealised, unharnessed and unincorporated by their host countries. Razan’s experience is irrefutable evidence that when refugees are welcomed and supported to fulfil their potential, they can take vital, validating steps beyond mere survival, to become thriving net contributors to their new communities.

Throughout history there are countless examples of refugees making unique and game-changing contributions to society; you might be surprised to learn that refugees played a part in creating British icons such as the Mini car, Marks and Spencer, and even good old fish and chips. Then you have the likes of Marc Chagall, Marlene Dietrich, Albert Einstein, and Hannah Arendt. And what about Adut Akech, Rita Ora, Freddie Mercury or Victor Hugo? What we would have lost if the door had been closed to them?

The young refugees I have met through UNHCR have been dynamic and inspirational. Emi Mahmoud, the incredible slam poet who is training to be a doctor; JJ Bola, published writer and educator; and Maya Ghazal who recently took her first solo flight and is on a path to becoming the first female Syrian refugee pilot – to name just a few. Our collective lives are enriched by embracing the potential, the skills, and the humanity of people we often simply label as “refugee”.

We are weeks away from 2020, and the eve of a new decade. Looking back at the previous ten years, we see a tumultuous time, full of human displacement. Refugee numbers cared for by UNHCR have doubled since 2011 and there are currently over 25 million refugees in the world. But beyond these staggering numbers lie the individuals. Let us remind ourselves that displaced people are men, women and children whose lives have been turned upside down by war, who have lost everything, and who have been forced to flee their homes and seek refuge in another country. This extraordinary global situation we find ourselves in today warrants an extraordinary global response.

We stand at a pivotal moment in history. On December 17th, world leaders are meeting at the Global Refugee Forum to commit more action to unlock solutions for refugees. But while we wait, every one of us can play a role, big or small, in helping refugees like Razan to thrive in the communities that host them. Every voice, every action, every one of us counts.

Everyone has a part to play. What will your role be?