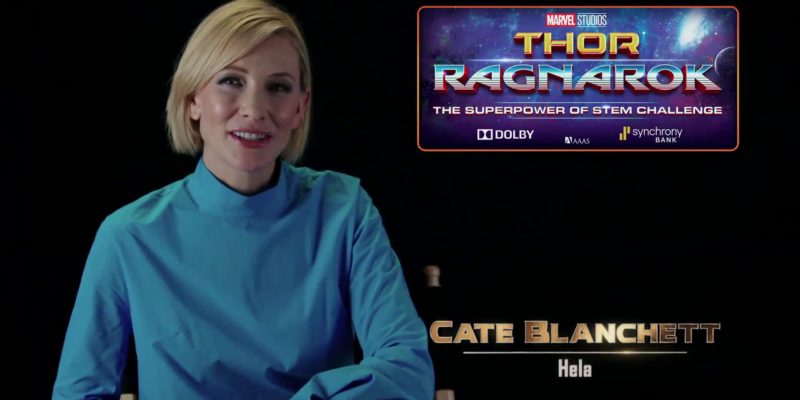 A new video with Cate Blanchett introducing the new Marvel Studio’s challenge has emerged today. Watch the video and see more infos below: This program, supported by American Association for the Advancement of Science, Broadcom Masters, and Society for Science & the Public, seeks to inspire young girls to use the superpower of STEM to help their family, community or the world be safer, healthier or happier. Marvel Studios’ Thor: Ragnarok Superpower of Stem Challenge invites girls nationwide, ages 15 -18 in grades 10 – 12 living in the 50 United States and D.C., to use the superpower of STEM to create an original Do-It-Yourself project that can be replicated by others.

Five finalists will be selected to come to Los Angeles and present their projects, in person, to a panel of experts and to attend the Red Carpet Premiere of Marvel Studios’ Thor: Ragnarok. Each finalist will receive: Two round-trip tickets to Southern California for the finalist and her parent or guardian, including scheduled meals, ground transportation to and from organized activities, hotel accommodations, from October 8 through October 11, 2017; the opportunity to be on the red carpet at the Premiere of Marvel Studios’ Thor: Ragnarok, $500 deposited into a high-yield savings account from Synchrony Bank; a tour of the Walt Disney Studiosin Burbank, California; and more.

One grand-prize winner will be selected from the five finalists to attend an immersive three-day mentorship in New York City with Disney Imagineering to build her STEM story, creating a professional-level video teaching other young people how to recreate her Challenge-winning project. The winner will also have the opportunity to demonstrate her Superpower of STEM project live to the nation with a brief appearance on Good Morning America. (The Walt Disney Company is the parent company of Good Morning America / ABC News.) The video created during her mentorship will be made available to students, teachers and families worldwide on the American Association for the Advancement of Science education resource website ScienceNetLinks.com.

In Marvel Studios’ Thor: Ragnarok, Thor is imprisoned on the other side of the universe without his mighty hammer and finds himself in a race against time to get back to Asgard to stop Ragnarok—the destruction of his homeworld and the end of Asgardian civilization—at the hands of an all-powerful new threat, the ruthless Hela. But first he must survive a deadly gladiatorial contest that pits him against his former ally and fellow Avenger—the Incredible Hulk!

Thor: Ragnarok is directed by Taika Waititi and returns Chris Hemsworth starring as Thor and Tom Hiddleston reprising his role as Loki. They are joined by Cate Blanchett, Idris Elba, Jeff Goldblum, Tessa Thompson and Karl Urban, with Mark Ruffalo and Anthony Hopkins. 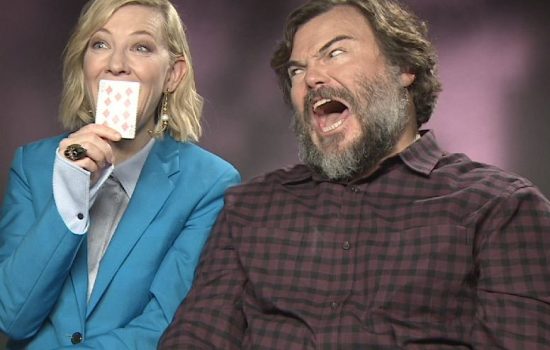