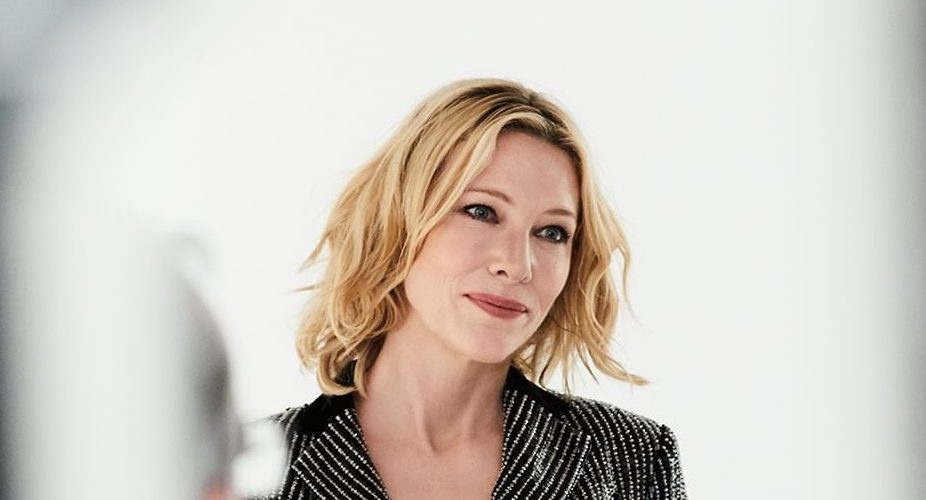 Let’s start the week with this new interview for British Vogue, a couple of photos added to our gallery!
Enjoy! Cate Blanchett has long been a female force to be reckoned with. Having starred in several big-hit movies – such as the Lord of the Rings franchise, Blue Jasmine and The Aviator – she’s not only a great talent, but her beauty and style musings are certainly notable, too. To mark the launch of Armani Si Fiori fragrance – she’s been the face of the beauty brand since 2014 – Blanchett talks to Vogue about fashion, feminism and fragrance.

On fragrance
I was given my first fragrance while I was at drama school, my friend gave me a Clinique perfume that she didn’t like. I had absolutely no money. But I think probably even earlier than that I wore perfume. I must have smelled like lavender or violets because that’s what my grandmother smelled of. For me, growing up with my mother and grandmother, and remembering their scents, I felt like one day I’m going to be allowed through the portal into womanhood and I, too, will wear a fragrance.

On hair colour
I changed from blonde to brunette [and then back to blonde] for a play [When We Have Sufficiently Tortured Each Other]. I was on stage at The National. I think I looked like my mother and my sister. It felt like some kind of throwback. I just felt like it was right for the character and it was right for the look of the play. So, I did it for work. I could’ve worn a wig, but I don’t like wearing a wig on stage. So, I did it for work.

On ageing
I don’t think about ageing at all until someone brings it up. [When] I think of some of the most inspiring faces, it’s Louise Bourgeois and Georgia O’Keeffe. I’m looking into the spirit of the woman and that’s what I love. Like Mr Armani, who’s really wanted to capture the spirit of being alive as a woman [in his work]. You know, it can be sensual, but it can also be full of power, it can be fragile, but it can be wicked. It’s a whole lot of dualities.

On skincare
It depends on the season. I always use good quality products and products that have a natural base [to them]. What I’ve been using recently (because of the weather) is Giorgio Armani Crema Nera. I use a cream moisturiser and a recovery oil every day to give my skin an extra barrier from the weather. But even on days like this [winter weather] I put on something with an SPF, too. I think it’s just a process I’ve inherited from growing up.

I’ve recently realised the power of exfoliation, so I use an exfoliant every day. If I’m not going to go out, I might put on a face mask. I occasionally have an oxygen facial – they’re great. Being on stage you’re constantly taking make-up on and off, it does take its toll on my skin.

On make-up
At night I’m usually face-planted onto a surface so I don’t have a lot of make-up on. During the day, I’ll wear mascara and I love the Rouge d’Armani matt lipstick. It’s really smooth and it doesn’t dry out your lips.

On fashion
I love fashion. I see it all as costume. That’s where it springs from [for me], an interest in character and costume – but also when you get to work with great designers or people who are so good at tailoring or interested in forward-looking ideas. If you look at people like Roksanda Ilincic and her incredible collection where she smashes those extraordinary colours and patterns together, it is really inspiring. Recently I was unpacking stuff and I found an Armani suit that I’ve had since 1997. You hold onto these things; you don’t necessarily need to have the latest and the new. So, if you have something that’s beautifully made, you keep it and you re-wear it. Fashion always looks backwards to look forward, so why can’t we just recycle and re-wear?

On reading
I have started an astonishing read by a journalist called Behrouz Boochani, called A Letter From Manus Island, about an offshore detention centre for Australia. The book is a series of texts that he smuggled out on his mobile phone and it is absolutely heartbreaking and eye-opening.

Having not read a lot of her previous work, I read a lot of Rachel Cusk’s writings last year. And I read an astonishing book by Maggie Nelson called The Argonauts, she’s part memoirist, part theoretician, part poet, part prose writer, she defies description. She wrote the book while she was pregnant, and [at the time] her partner was transitioning from female to male. She describes that whole journey. It’s an astonishing read.

On feminism
I think there are now more women in the writer’s room. There are more women at the centre of narratives being optioned and there are more platforms on which to release stories. There are certain stories, from the Nineties, about really interesting female lives but they were basically used to tell the same story about a woman. A woman in a man’s world. Whereas I feel now that the complexity and interest of these characters are being placed in very interesting backdrops and the stories that are being told about them are more sophisticated and complex. It excites me, both as an actor but also as an audience member. You don’t have to be in them to consume them.

New images and spot for Sì