Welcome to Cate Blanchett Fan, your prime resource for all things Cate Blanchett. Here you'll find all the latest news, pictures and information. You may know the Academy Award Winner from movies such as Elizabeth, Blue Jasmine, Carol, The Aviator, Lord of The Rings, Thor: Ragnarok, among many others. We hope you enjoy your stay and have fun!
Interviews Magazines

The cast of Mrs. America graces the cover of newest issue of Emmy Magazine. The photoshoot, by Robert Ashcroft, dates back to the Winter TCA Tour, as it does the video interview from the set. 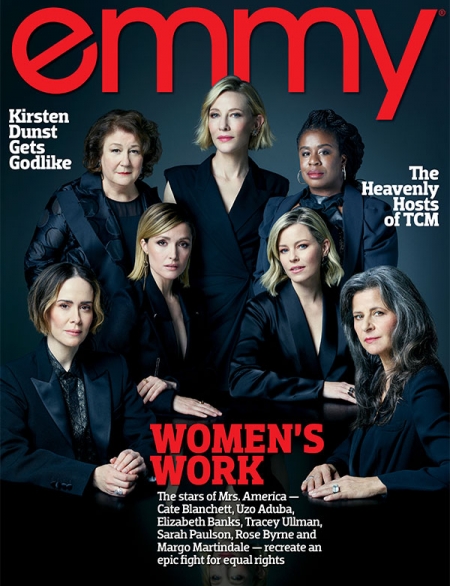 Right Minded
Cate Blanchett leads a stellar cast in Mrs. America, a look back at the feminist leaders of the ‘70s, their political foes and the fight over the Equal Rights Amendment.

By now, the Equal Rights Amendment was supposed to be history, not news.

The proposed amendment to the U.S. Constitution was intended to guarantee equal legal rights for all Americans, regardless of sex. Approved by the House of Representatives in 1971 and by the Senate the following year, it needed to be ratified by 38 states by 1979.

But before that could happen, Phyllis Schlafly stepped in. The story of how the conservative activist defeated the ERA (which has since been revived — and still awaits ratification) is a large part of the story of Mrs. America, the FX on Hulu limited series now streaming on FX on Hulu.

A deep dive into the second wave of feminism (suffragettes were the first), the series challenges assumptions across the political spectrum.

To some, Schlafly (Cate Blanchett) was the enemy, fighting the ERA and other feminist causes. To others, she was a hero: a wife and mother of six whose Eagle Forum promoted traditional values.

From the opening scene — in which Blanchett models an American-flag bikini at a 1971 political fundraiser — viewers may reconsider their opinions of both the woman and the era.

Over nine episodes, the series adds shades of gray to what had been monochromatic views of this history.

“None of us were interested in a piece of advocacy entertainment,” Blanchett says in a Los Angeles studio, where Mrs. America’s principal cast members and producers gathered for their emmy photos. They shared an easy rapport, borne of their five-month shoot in Toronto.

Dahvi Waller, the series’ creator, showrunner, writer and executive producer, recalls early talks with fellow executive producer Stacey Sher, who was determined to present the story “in a nonconfrontational way.” “We have to start talking to each other as humans,” Waller says.

“There is a lot of doctrinaire, binary thinking on both sides,” adds Blanchett, who also served as an executive producer. “These are extremely messy, smart, hilarious women. And we see them from different perspectives. It is interesting to see the contradictions within them.”

Scans will be added as soon as we have them.

As we reported in our last post Cate was on the cover of Sunday Life magazine. We are still looking for the scans, please mail us if you have them.

“I wanted to help scaffold the conversation around… the notions of equality and what that means for men and women.” Cate Blanchett’s new TV series, Mrs. America, tells the story of American anti-feminist activist Phyllis Schlafly. Speaks to Sunday Life about isolating with her family in London, gender equality and why she as a feminist took on the role. Plus, the expert-dividing laser technique claiming to fight the effects of menopause; Adam Liaw whips up a light and easy Chinese dinner; and why keeping a diary is good for you health. Cover photography: Michele Aboud/ AUGUST/ Raven & Snow #cateblanchett #mrsamerica #equality #genderequality #womanpower

In the meantime enjoy the most recent magazines scans added to the gallery, featuring interviews promoting Stateless and Mrs. America. Enjoy!