Exciting news! We finally have our first look at Cate Blanchett as Lilith Ritter in Nightmare Alley plus an interview with Guillermo del Toro. The trailer will drop on Thursday, September 16th 2021. Also, IMDb has listed Nightmare Alley release dates for other countries. Check them below: 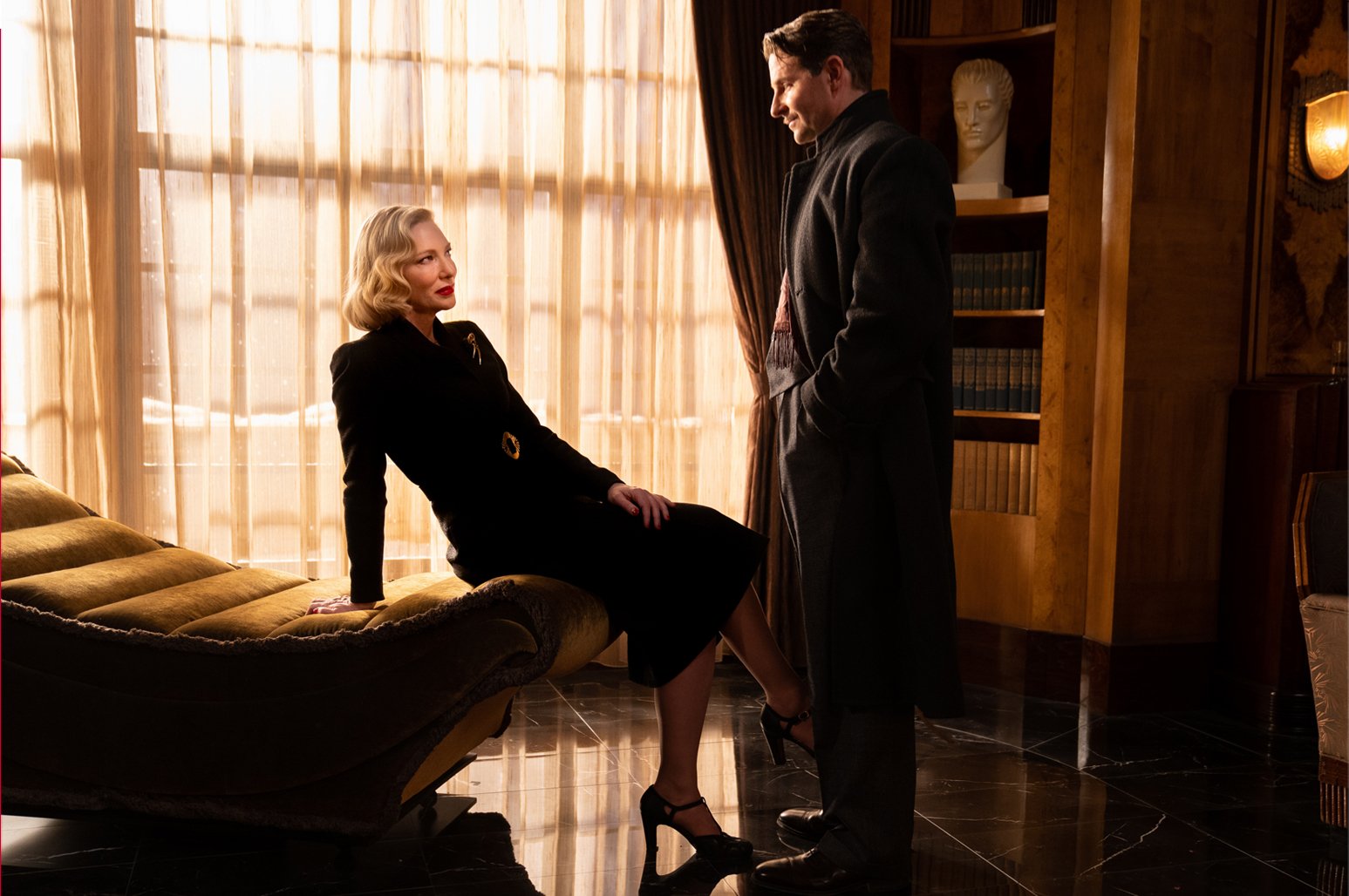 Deception is at the core of Guillermo del Toro’s new thriller Nightmare Alley, but the Oscar-winning filmmaker actually wants to be completely honest with audiences: This movie is not what you might think it is. The ominous title, combined with del Toro’s long history of bringing ghosts, ghouls, and twisted creatures to the screen in films from Cronos to The Shape of Water, may lead to the mistaken assumption that it’s another otherworldly tale. Nightmare Alley is actually his take on classic film noir, marking a stark shift for the filmmaker. But he knows the false impression might stick.

“That is a distinct possibility,” del Toro tells Vanity Fair. “It has happened to me in the past with Crimson Peak, where people went in expecting a horror movie. I knew it was a gothic romance but it was very difficult to put that across. But yes, this has no supernatural element. It’s based completely in a reality world. There is nothing fantastic. It’s a very different movie from my usual, but yes, the title and my name would create that [impression].”

There are still monsters in this film, out December 17, but these are all human beings: glamorous, elegant, and more alluring than off-putting. Maybe that makes them even more dangerous. Bradley Cooper stars as Stanton Carlisle, a former carnival worker who becomes a big-city star as a nightclub performer, using cold-reading tricks he picked up in the sideshow to create the impression he is a powerful mind reader. Now the marks and rubes he targets are millionaires. Cate Blanchett plays Dr. Lilith Ritter, a psychiatrist who first tries to expose him as a charlatan, then becomes embroiled in his schemes.

“The carnival is almost like a microcosm of the world,” del Toro says. “Everybody’s there to swindle everybody. But at the same time in the carnival, the [workers] know they need each other. In the city, much less so.”

Nightmare Alley is based on a 1946 novel by William Lindsay Gresham, made previously into a gritty 1947 film starring Tyrone Power. Del Toro says his screenplay with Kim Morgan is drawn from the page rather than the screen, which required heavy reworking. “From the beginning, our interest was to go for the novel, but it’s almost impossible to adapt because it has a very kaleidoscopic, very peculiar voice. You would need a six-hour miniseries and shifting points of view, and this and that,” del Toro says. “We started from the novel, and didn’t want to do a remake as much as a new adaptation.”

Del Toro says he first became interested in the project in the early 1990s when his longtime collaborator Ron Perlman (Cronos, Hellboy, Pacific Rim) brought him the story in the hope they might make it together, but the rights proved to be too difficult to untangle. “So I put it on the back burner,” the director says. The yearning to make it remained. “When I was growing up, I wanted for sure to do two genres: noir and horror,” he says. Del Toro has directed a lot of the latter, but this was his chance to finally do the former.

Nightmare Alley begins with Stanton as a nobody, working a roustabout job with a small-time carnival that is not the innocent fairground of American mythology. The traveling show he’s part of, overseen by backroads impresario Clem Hoately (Willem Dafoe) is a far more illicit and disturbing affair. “This carnival is really, really operating in the fringes,” del Toro says.

Its “geek show” is one reason it exists on the periphery. Long before geek came to mean someone who obsesses over, for example, pop culture, it was the term for a carnival act in which a “subhuman” shocks the crowd by attacking animals—snakes, rodents, and usually chickens—and killing them with his teeth. Often the “geek” was an alcoholic or opium addict, desperate to do anything for some cash or a hit, and the violence was real. It was a degrading experience for everyone involved, including the audience.

“This act was illegal in most states, but small carnivals still carried it. And they were operating on a wing and a prayer until they got caught,” del Toro says. “And that’s the type of carnival Willem incarnates. This is a rougher, rougher world.”

In real life, carnival performers who considered themselves legitimate took pride in never working with a show that exploited a geek act, so this would be the dregs of entertainment. It’s why Cooper’s Stanton is eager to escape to a better place of business, taking the scamming tricks he has learned to shake the carnie dirt from his heels and break into high society. What he doesn’t realize is that his desperation could turn him into the lowlife, preying on the unwitting and vulnerable, even when he’s doing it in front of a crowd.

The tool Stanton uses to pry his way into a high-paying nightclub act is a subtle verbal code developed by tarot reader Zeena (Toni Collette) and her drunkard husband Pete (David Strathairn) that allows her to stand onstage and pretend to psychically intuit things audience members have written and given to him in the stands. The code—based on sounds and inflections made by the operative in the audience as he gathers the questions—is a valuable piece of intellectual property, and Stanton has no problem stealing it.

He also steals Molly (Rooney Mara), a young carnival worker who becomes his girlfriend and, once he teaches her the code, his audience operative. Her strongman protector, Bruno (played by Perlman) can protect her no longer. The pair escape to the city and start a new act. With a new look. And a newfound willingness to take their con to a new level.

When Zeena and Pete did the act, their goal was only to wow the crowd with a bit of misdirection and magic. Despite the underhandedness of the sideshow, del Toro says it’s a place where both the performers and the audience have an unspoken agreement about what’s happening.

“Ultimately, the carnival is a place where you will get swindled or you will get scammed, but they all know they’re doing it,” the filmmaker says. “The [audience] knows it’s a system, and [the performers] know that they give people what they want in return: an escape, bright colors, life, some laughter, and a place not to think of your daily life. So the trade is very fair.”

It’s less fair when Stanton decides that maybe he can take his performance off the stage and use it to grift rich people by exploiting their worst pains and losses with his apparent supernatural ability to communicate with the beyond.

That’s where Blanchett’s psychiatrist, Dr. Ritter, enters the picture, determined to prove that Stanton’s act is a sham. “She’s there to disprove him. And basically, he tries to measure himself against her,” del Toro says. “Stan was the smartest guy in the room at the carnival, but now he’s at sea with much bigger sharks. He’s tempting fate. And he goes against Lilith, who is quite formidable.” 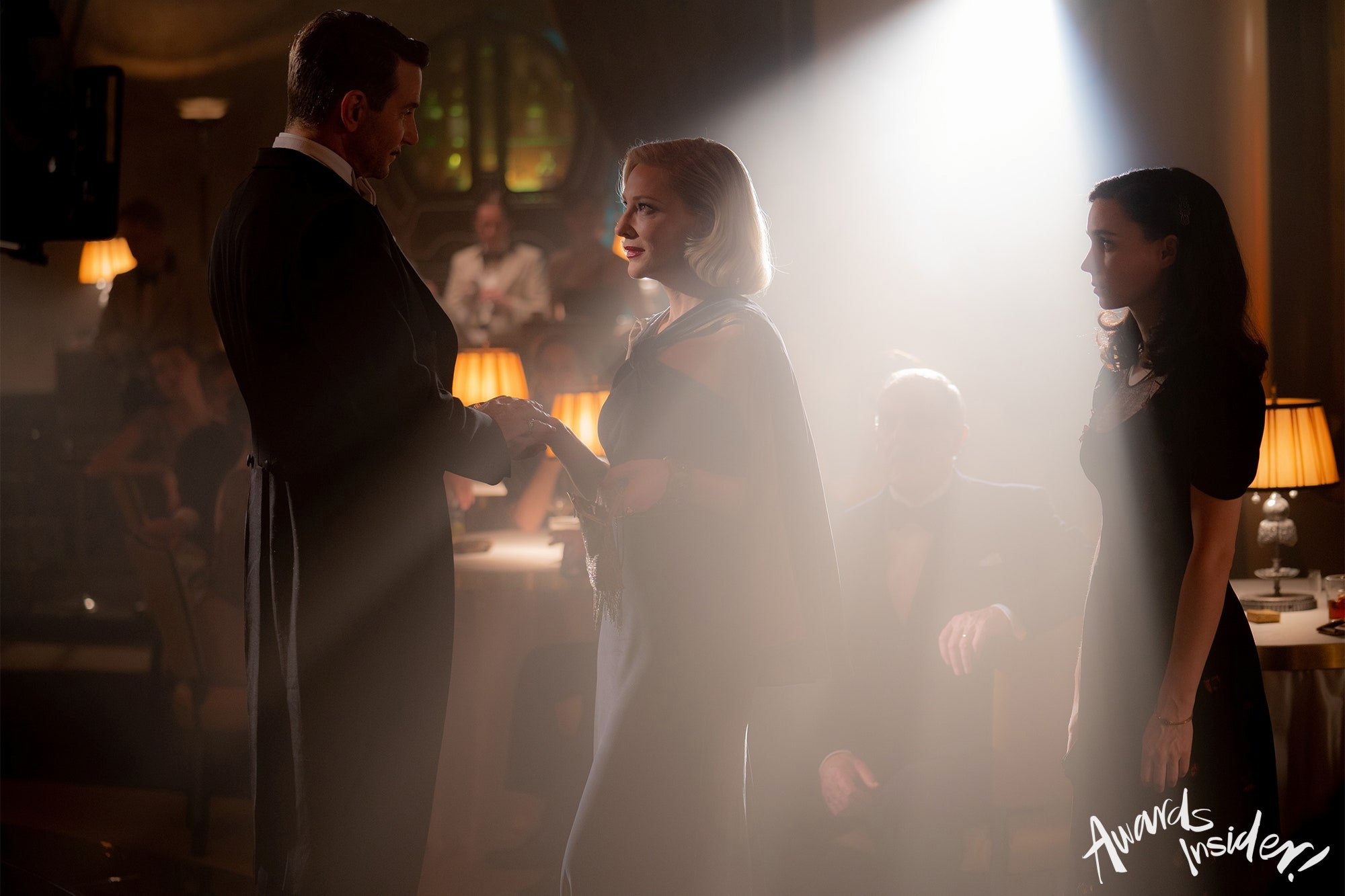 If there’s an innocent party here, it’s Molly, who gets swept away by this raging, shark-filled sea. “Molly acts as the moral center of the movie,” del Toro says. “She knows what’s right. And she knows what’s wrong. She knows the difference.”

Stanton is the central figure in this story, but you obviously wouldn’t call him the hero.

That’s part of del Toro’s effort to invert some of the archetypes of classic film noir. Traditionally, the central character would be a stoic who is tempted by an alluring woman who uses sex appeal and a lack of scruples to manipulate and destroy. This time, Cooper is that enticing, dangerous character. “Thematically, I’m very interested in exploring the genre from a different point of view,” the director says with a chuckle. “Instead of a femme fatale, I have three very strong female figures and an homme fatale.”

Can Stanton be saved or redeemed? That’s the mystery of this story. People who are struggling will often find ways to lash out and take down those they consider to be more fortunate. They justify and rationalize it in many ways, and sometimes they might be right. But when there is no bottom to how low you will go, it’s easy to get lost in the abyss. 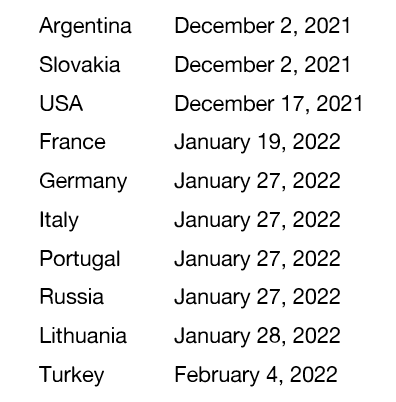 Trailer / poster coming up in a couple of days! https://t.co/fbSEaMXDEC

So It Goes Magazine – Photoshoot preview