Welcome to Cate Blanchett Fan, your prime resource for all things Cate Blanchett. Here you'll find all the latest news, pictures and information. You may know the Academy Award Winner from movies such as Elizabeth, Blue Jasmine, Carol, The Aviator, Lord of The Rings, Thor: Ragnarok, among many others. We hope you enjoy your stay and have fun!
Published on In
Articles Don't Look Up Interviews NIghtmare Alley

El Pais published a new interview they did with Cate ahead of the release of Nightmare Alley in Spain on January 28th. Here’s a google translated interview.

The actress premieres ‘Nightmare Alley’, by Guillermo del Toro, while leading the pre-production of ‘A Manual for Cleaning Women’, by Almodóvar. “I want to enjoy Pedro’s passion,” she says.

The deep, unique voice of Cate Blanchett (Melbourne, 52 years old), resounds on the other end of the phone: “What if I am Pedro Almodóvar’s new boss? Noooo [laughter]. We are fellow adventurers, I don’t believe in hierarchical structures”. The actress is promoting Nightmare Alley, by Guillermo del Toro, but A Manual for Cleaning Women appears on the horizon , the 43 stories of Lucia Berlin, who died in 2004, which Almodóvar has written script. For four years, the Spaniard has been working on the project. But before the doubt of whether it would go ahead or not, in his production company, El Deseo, they did not renew the adaptation rights. To the rescue of the film appeared Blanchett, its possible protagonist, who is passionate about the script, and who therefore bought the rights. Now, her production company, Dirty Films, is leading a work that will feature that script and be directed by Almodóvar and will be filmed in 2023. “We are collaborators, something I look for in my films. I had been wanting to work with Pedro for a long time, enjoy his passion”, she says.

About her character, she explains: “It’s fascinating how Berlin explored herself from many different perspectives: love, addictions, the creative process… All the women in the stories are, deep down, herself. And that Pedro has grasped, because he knows what the primary mechanisms of relationships between human beings are like. In his films there is heart and at the same time a profound reflection on aesthetics”.

Blanchett finds a quick connection between Almodóvar and del Toro: “Both are deeply humanistic filmmakers. You can see it in Parallel Mothers, in its final interweaving between History and the deepest human feelings. He loves people.” And she explains that next week they will meet again: “On Wednesday I will present a screening of her film in London and Pedro and Penélope Cruz will be there. There is no plan that I want more”. It is a pass for members of the Hollywood Academy, since until February 1 they can vote for the Oscar nominations, and it coincides with the premiere, on Friday the 28th, of Parallel Mothers in the United Kingdom.

The excuse for the interview, held last Tuesday, is her work in Nightmare Alley, in which she plays a psychiatrist, Lilith Ritter, without any scruples to swindle people and who will find in the protagonist – who is brought to life by Bradley Cooper—, a trickster hardened in local fairs who now acts for rich people, his best possible ally. A femme fatale manual. “Well, it is that usually in film noir there are. And her wardrobe and her office provide many common elements of these women. But I also think that part of that type of character is made up of their body, and here that beautiful body is provided by Bradley. Guillermo has shunned the traditional image and planted elements of corruption and perdition for all the characters.” Is it a movie without monsters, unlike almost all of Del Toro’s previous films? “Ugh, the no monster thing is indeed moot, because some of the characters are demeaned in ways that you might think they are. The promises of power and money push them into an amorality that is as frightening as the monsters. Those behaviors are also terrifying.”

Production on Nightmare Alley was halted for six months during the lockdown, time Blanchett spent gardening. “It was frustrating for all of us, because we had very little left to finish, but at the same time it helped us reflect on what we had filmed.” For the actress, there is no one comparable to the Mexican director. “It’s unique. Not only is he a great lover of film history, as is obvious, but he is also fascinated by acting, production design, photography. He is constantly creating and is an artist who drives those of us who work to be better.” And that is why she will also be with him in Pinocchio, an animation project that will finally be released in September, produced by Netflix. An hour after this interview, Del Toro himself explained to EL PAÍS: “I know that I always say that the monsters that scare me the most are human beings. But Cate, no [laughs]. Our relationship has been explosive and joyful. It has been like discovering a friend who was already a friend before I met him. Years ago we developed a television series that was never shot and I was captivated by its humor and depth. Now my challenge is how to write roles for Cate in my future films.”

Blanchett has launched numerous messages in favor of movie theaters in recent years. When in September 2020 she attended the Venice festival, as president of its jury, he pointed out: “We have to go back to the theaters. We are coming out of a streaming monoculture that has lasted six months. This is the opportunity to re-examine how this technology changes the way of seeing and making cinema”. Now she explains, after being part of the success of Netflix Don’t Look Up: “I am passionate about getting involved in fascinating stories that force me to take risks. And in this case, I loved joining the world of Adam McKay, I’ve been in that project for years, before Netflix came on. Adam’s way of telling it in a documentary style is shocking… Because we actually live in a world where populism rules, where arguments are not listened to.” Due to these interests, she jumped from the cinema to the theater and although she has directed on stage, she does not think he will soon do it for the big screen: “I have always been interested, but you need a lot of patience and time. I have a couple of ideas, and at the same time four children. Too much hassle for now.”

On the element that unites both films, Don’t Look Up and Nightmare Alley, which reflect on what is true or false and the triumph of fake news, she points out: “The global level of distrust and fear is incredible. I am still amazed at the widespread corruption that we have accepted. We should reflect more on it and that is why it is pertinent to make these types of films, to debate about it”. Do those who best manipulate the rest of human beings win? “It infuriates me to see where the world is going because of this constructed fear, created by some.” 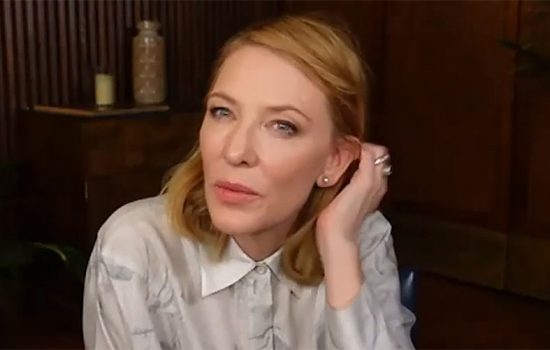 Cate Blanchett on Nightmare Alley and A Manual for Cleaning Women