Welcome to Cate Blanchett Fan, your prime resource for all things Cate Blanchett. Here you'll find all the latest news, pictures and information. You may know the Academy Award Winner from movies such as Elizabeth, Blue Jasmine, Carol, The Aviator, Lord of The Rings, Thor: Ragnarok, among many others. We hope you enjoy your stay and have fun!
Published on In
Articles Don't Look Up Interviews NIghtmare Alley

Here’s a new interview that Cate did with Sydney Morning Herald. Nightmare Alley is now out in Australian cinemas.

It’s a stunning performance, make no mistake. Perhaps even a career-best. In a richly detailed, delicately stitched study of human horror, as carny-turned-conman Stanton Carlisle (Bradley Cooper) masters the art of stage clairvoyance and is quickly consumed by his ambition and greed.

Carlisle thinks he’s playing games with Blanchett’s Dr Lilith Ritter but in truth, he’s met his match. And while femme fatale seems at first flush to be a somewhat dated way of framing a woman whose characteristics seem no more complicated than intelligence, ambition and agency, Blanchett says she’ll live with the label.

“Barbara Stanwyck is one of my all-time favourites, so yes, [it’s] wonderful company; I’ll take that on the chin,” Blanchett says. “But it is more complex than that, and if you look at femmes fatales traditionally, they have been driven to destroy men. A siren draws boats onto the rocks because, in a way, they’re enigmatic and they’re mysterious and they’re unknowable. Lilith is all of those things.

“But the wonderful thing about Guillermo is that he loves all the characters, he loves their quirks, their strangeness, their monstrousness, but he’s interested in revealing those inner machinations,” Blanchett adds. “Even though Lilith is in that enigmatic space as a femme fatale, hopefully you understand that she has a higher purpose.”

Nightmare Alley is based on the 1946 novel of the same name by William Lindsay Gresham, and follows an earlier screen adaptation of the same book, in 1947, starring Tyrone Power and Helen Walker in the roles now played by Cooper and Blanchett.

Under the guiding hand of del Toro – the man who made the Oscar-winning films Pan’s Labyrinth (2006) and The Shape of Water (2017) – Nightmare Alley becomes a study of the darkness within human nature, a de facto horror film that meshes the colourful whimsy of a backwater carnival with the knife’s edge suspense of a thriller. And if awards season buzz is to be taken seriously, Nightmare Alley is a genuine Oscar contender.

Speaking to this masthead in a separate interview, del Toro said he took great delight in pairing Blanchett and Cooper, whom he considered to be two extraordinary actors. “When I took Bradley to Cate Blanchett, I said, hey, King Kong, you’re about to meet your Godzilla.”

“So, I’m Godzilla, am I?” laughs Blanchett when I relate the story to her. I ask her whether del Toro is a genius, monster-tamer, cuddly bear or madman?“ He is, of course, all of those things,” Blanchett replies. “But the thing that you find with Guillermo, apart from his unparalleled ability as cinema artist, is this incredible, incredible heart.

“When we say that a director holds your hand through an experience, the feeling is somehow [that the actors are being] mollycoddled, but he doesn’t do that.

“He can be brutally honest, but it’s always done from a place of wanting to make things better. And this story, which has been brewing for a really long time, [is about] the monster within, that sort of extreme-sport aspect of our emotional, dark recesses that we keep in check by being, quote-unquote, civilised.”

In a sense, Blanchett’s dance with the dark side is an exercise in wilful pretence. Were she the sort of actor who inhabited a noisy social media life, she says, the idea of a double identity might be more everyday. And perhaps, she adds, fraught with greater risk.

“In a social media sphere where the wholesaling of oneself and one’s day-to-day identity gets morphed with one’s exterior persona … some people would be very good at navigating that, but I know [for me] it would be disastrous,” Blanchett says. “I feel very lucky to have a space to do that that is not enmeshed in my day to day.

“And of course, that’s the joy of being an actor; a little bit like a carnival performer, you get to do that, to investigate the monstrous, freakish, dark side of being alive in a hermetically sealed environment that is adjacent to one’s life, and then you step out and live your real life.”

Though the film resides in the shadows on the edge of del Toro’s unbridled love of the horror genre – though it is, strictly speaking, more traditional noir than explicit horror – it also serves as a chilling polemic on the danger of charlatanism, in an era where the political discourse seems to have been infected by hollow, performative showmen.

“It’s unbridled, unfettered charlatanism,” Blanchett says. “When it’s the circus and the carnival, where you’re told a lie and you know that you’re being lied to, it’s for fun, it’s for pleasure. It doesn’t affect the way our society is structured or who has the power, and who doesn’t have the power, and how people get treated. That’s a safe place to do it.

“But it’s when the people start believing their lies, and they’re running the country and, as you say, those charlatans are just celebrated. When the people in the corridors of power celebrate the fact that they’re not even bothering to dance with the truth, that’s where we’re in real trouble, and that’s the space we find ourselves in.”

Though they are profoundly different films, we’re not in so different a place to another recent film of Blanchett’s – Netflix’s monster hit Don’t Look Up – in which she plays newsreader Brie Evantee.

“It’s a climate-change film, but it’s not about climate change,” she says.

“I think, really, the world is so unbearable for so many millions of people right now that it’s the only way we can talk about it.

“You open the proverbial newspaper and it’s a shit show, so you need to escape into a dream state, in a way. And that’s the space that Guillermo’s provided with Nightmare Alley. So all of those associations and textures are alive, but they’re there for the audience to make those connections, rather than being told to.” 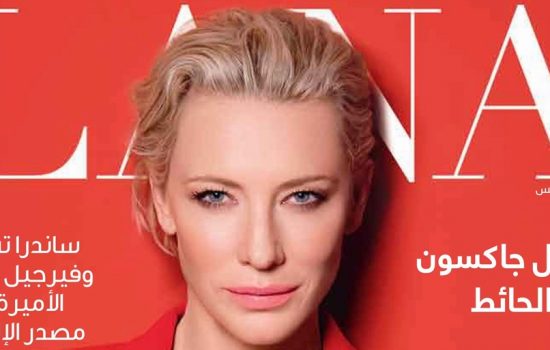