Cate Blanchett: ‘It’s part of life to f— up, pick yourself off the floor and keep going’ 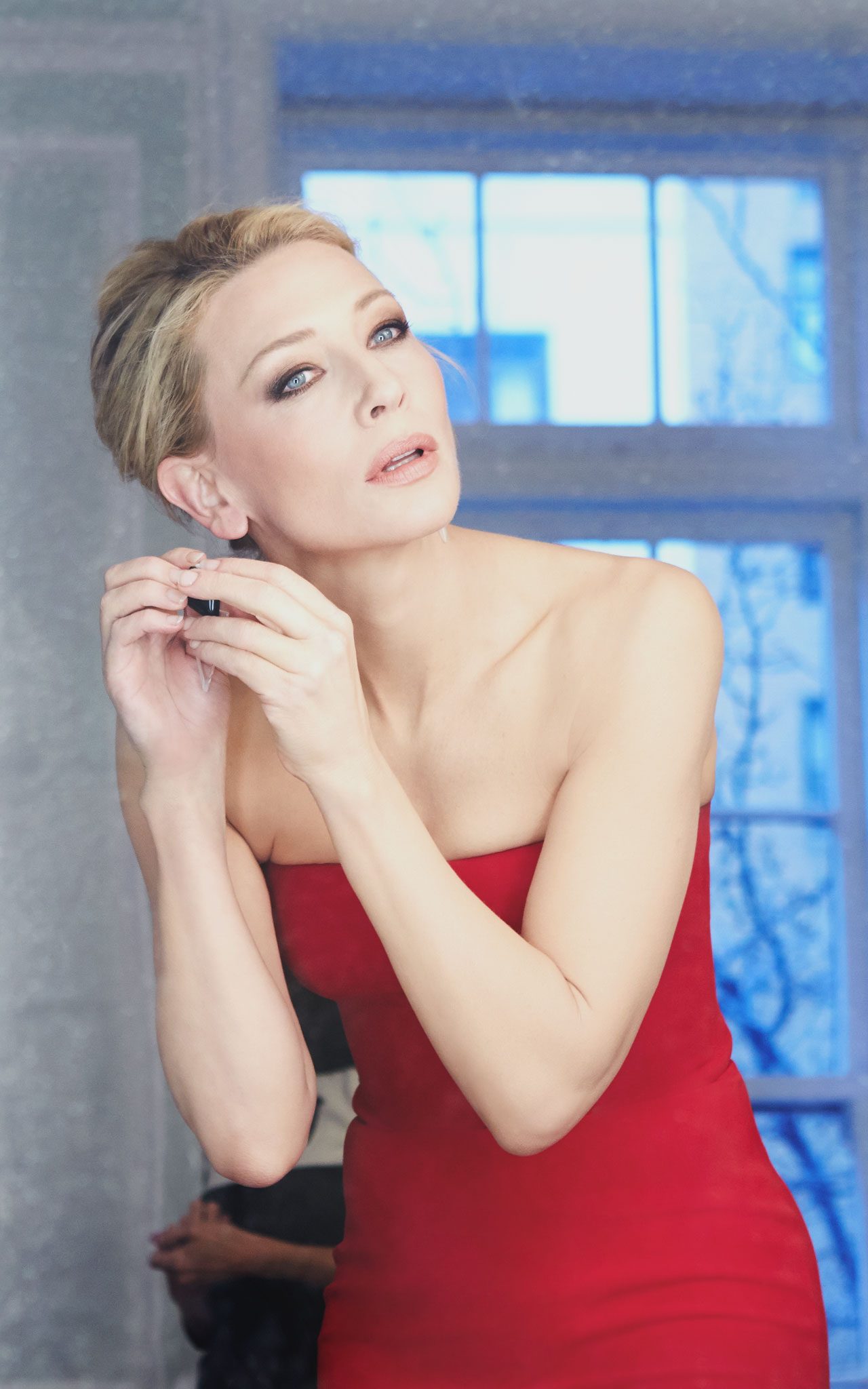 ‘I remember the very first time I came to Milan,’ says Cate Blanchett, ‘I was 18 and backpacking round Europe. I walked into the Duomo and just burst into tears. Shafts of light were coming through the clouds of incense, and the smell of frankincense was so powerful.

‘I think my response was heightened because I was on such a big adventure – I’d never travelled on my own outside Australia. And that first trip was marked by the smell of Italian churches.’

Three decades have passed, but the room in which we meet is scented with that same heady note. We’re in a suite at the Armani Hotel – an oasis of quiet on the bustling Via Alessandro Manzoni.

‘Whenever I check into one of Mr Armani’s hotels, it hits me as soon as I walk off the street – that intense oud.’

It’s a signature of Sì, the scent that Cate has fronted since the fragrance was launched in 2013.

‘Look at all those bottles,’ she laughs, gesturing to a neat line of stoppered vials, from an eau de toilette to three different eau de parfums and the new limited-edition Sì Nacre.

‘That’s how long I’ve been working on this! Scent speaks to your emotions, your aspirations and your dreams, and if you inhale one that makes you feel good about yourself, or sexy, or whatever it is you want to feel, then you’ll project that from the inside out.’

For Cate, that scent is Sì Intense, her favourite in the range. There is always a bottle in her handbag and she is liberal when it comes to spritzing – so much so that the scent is now almost part of her.

‘One day, I thought I had a rat in my wardrobe. I kept hearing this…’ She makes a scrabbling noise with her fingers against the sofa beneath her.

‘But I opened it and Iggy [her nine-year-old son, Ignatius] was in there, the funny little thing!’ She laughs.

‘I used to do that when my mother was out working. I would pretend I was hiding, but really, I just wanted to be surrounded by her fragrance, which was an intermingling of things – partly the perfume she wore, but also her own distinct scent.’

Ignatius is the youngest of Cate’s three sons with husband Andrew Upton, a playwright; the couple adopted their daughter Edith, now two, in 2015.

Last year, they relocated from their native Australia to East Sussex, though the actress’s approach to beauty remains uniquely Antipodean.

‘It’s not so much about beauty – it’s more about preservation: the old slip, slop, slap,’ she laughs, chanting the slogan of a famous Australian sun-protection campaign from the 1980s.

‘When I was 12 or 13, I covered myself in baby oil, lay out on the flat tin roof of our house and sunbaked until I was red. My mother gave me a big lecture about what could have happened, so I never did it again. My children get so annoyed with me – even on a cloudy day in England, I’m putting sunscreen on them.’

Other than that observance, by celebrity standards, Cate’s routine is pared back.

‘All each of us is trying to do is look our best without spending too much time thinking about it. I really don’t use a lot of different products – I just stick with what works.

‘You can get so obsessed with this stuff. Someone recently showed me a retouching app and I thought, I really do not want that – I want to be able to see things for what they truly are.’ Although fashion fascinates her, her new life in the country means that, these days, she rarely dresses up.

‘I love beautiful things, but after I had my first baby, I was being vomited on a lot – on the hour every hour – I thought, “I have to get rid of all my dry-clean-only clothes, this is costing me a fortune!” One of the life-changing things I did not so long ago was take lessons in ikebana [the Japanese art of flower-arranging]. It was like meditation. I’m trying to develop more hobbies.’

Not that there can be that much downtime in Cate’s life. This year, she made her Broadway debut and had roles in two films: the art house Song to Song and the blockbuster Thor: Ragnarok.

In 2018, she will voice python Kaa in the latest Jungle Book adaptation and join an all-female cast for Ocean’s Eight, the latest film in the Ocean’s Eleven franchise.

While many actresses complain of being typecast or sidelined, she has played everyone from Katharine Hepburn to Queen Elizabeth I – twice – and picked up two Oscars, three Golden Globes and three Baftas in the process.

‘I’m lucky to have had interesting roles all the way through my career. I think what’s shifted across all industries, not just our own, is that women are feeling a collective responsibility to make things happen,’ she says, drumming out each word on the table, ‘for themselves, other women and generations to come.

Cate’s charisma is palpable. She is an acting powerhouse and a mother to four – the embodiment of having it all. Except, she says, you can’t have it all.

‘That’s a marketing myth to keep women feeling bad about themselves, frankly. There are times I say to my kids, to my friends, “I’m sorry, I’m off my game today.”

‘An apology goes a long way–as long as it’s followed by an attempt not to f—k up in the future. But it’s also part of life to f—k up, get yourself off the floor and keep going. But private life and career–I actually don’t juggle them or it’d be a mess.’ She pauses, then bursts out laughing. ‘I did not do my own hair and make-up this morning, you know. But neither did I airbrush myself.’