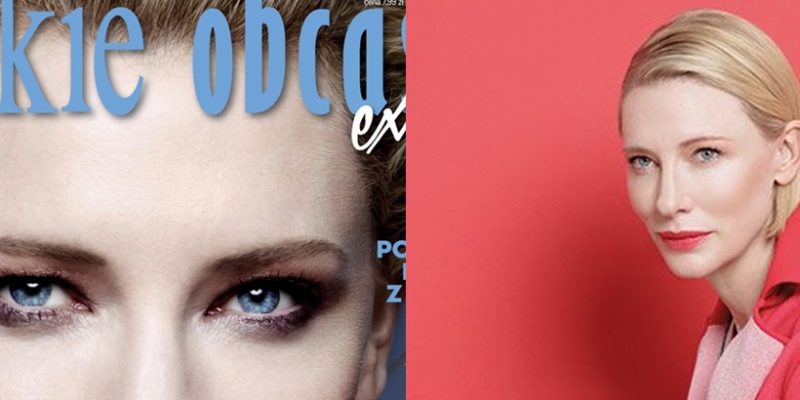 Thanks to the generous Katarzyna the scans from Wysokie Obcasy Extra magazine are now available in our gallery!

Also, there is a new interview with Cate in Vogue Arabia. Read it below!

Cate Blanchett on Why the Industry, and World, Need to Change

A subtle whiff of Armani Sì permeates the air as Cate Blanchett sits down. She is – clichés be damned – every bit as ethereal as she looks on screen. She’s in a Marni houndstooth-print pencil skirt and so green silk blouse, her skin milky smooth, her hair in a modern blunt cut, her makeup minimal. Yet she’s the first to dispel this Hollywood deception of perfection: “This is not what I look like on a regular school run!” She’s been an otherworldly elf queen, a formidable goddess of death, a fast-talking Katharine Hepburn, a powerful young English monarch. She’s been nominated for seven Academy Awards and won two – for best supporting actress in The Aviator in 2004, and best actress in Blue Jasmine in 2013, Woody Allen’s unflinching dark comedy of a woman slowly losing her grip on her reality after her husband is convicted of large-scale financial fraud. In person, though, she’s warm, engaging, and sharp as a tack. There’s no hesitation in her clear, strong voice, the Australian accent so but discernable. This is a woman in her prime: unafraid, uncompromising, unabashed.

The 48-year-old actor is in Dubai to head the jury of the IWC Filmmaker Award at the Dubai Film Festival; her third year of involvement with the prize, as an IWC Schaffhausen brand ambassador. For the past six years, the Swiss watchmaker has worked to boost the Gulf ’s film industry by awarding this prize to a feature-length film project in production. This year’s crop of four finalists included three female directors, a feat Blanchett is proud of, especially for the region. “All the submissions were extraordinary,” she enthuses. Saudi Arabia’s first female filmmaker, Haifaa Al Mansour, walked away with the top honors – and a US $100 000 cash prize – for her script Miss Camel, an inventive stopanimation tale about a Saudi teenager longing to escape an arranged marriage, and then discovering she can talk to animals. It’s a tale of selfdiscovery and female empowerment, and seems apt for the times. The Los Angeles-based director is no stranger to accolades – her 2012 film, Wadjda, was the Kingdom’s first social entry for best foreign language film at the Academy Awards. She’s also recently completed Mary Shelley with Elle Fanning, as well as the Netflix movie NappilyEverAfer.

“The finalists’ work was very diverse, surprising, and innovative,” Blanchett says. “None of them ended up where I expected them to when I started reading. For this particular award, it’s not just about the story – it’s also about the filmmaker’s vision for it.” She’s full of praise for the region’s film industry, which, while often dealing with triumph over diversity or confronting hardship and conflict, both familial and societal, tackles the themes in diverse ways. “It’s interesting that there are a lot of comedies being made here. Comedy is a really important part of dealing with the world at the moment,” she says with a knowing smile. “We all need to laugh. What I find most impressive is about the films from this region that come to the West are often made with very few resources, and the level of invention and how accomplished they are in their realization is quite breathtaking.”

While it might be easy to surmise that the mother of three boys – Dashiell (16), Roman (13), and Ignatius (9) – would’ve focused her film choices on strong female roles with the arrival of her youngest, daughter Edith, in 2015, she swiftly puts that notion to bed. “I’ve always been very personal in my choices. If you have true engagement in the world in which you live, your choices will end up being current and relevant. I’ve never made consciously political choices but I have a strong, innate sense of wanting to be in interesting, engaged conversations and my gender shouldn’t be an impediment to that happening.” To this end, she doesn’t limit herself with genres, being that rare actor who can seamlessly move from comedies to heavy-hitting dramas, experimental art films, and fun action adventure roles, like last year’s Thor: Ragnarok. She is disappointed, however, that she hasn’t worked with as many female filmmakers as she would’ve liked. Here the conversation takes a weighty turn and it’s clear she is serious yet spent that society is still having the same conversations about discrimination and diversity. “As a species, we are very slow to learn and so I should be unsurprised that yet again we’re talking about equal pay for equal work; we’re talking about the intolerance for sexual abuse and domestic violence. But the difference, I think, is that women have had enough. Certainly, in my industry, women have had enough for a long time. We cannot be in this same place in 10 years, having the same conversation. It doesn’t behoove us economically, socially, morally, politically. Women are half the population. That’s the momentum we cannot lose this time. There’s an incredible opportunity to shift our thinking. We all talk about progression, innovation… Diversification leads to deeper innovation and real innovative change is always scary and daunting before it happens.”

It’s somewhat in her DNA to be interested in what women do and the challenges they face – After the death of her father when she was 10, her mother, June, left her teaching career for property development in order to support her three children. Blanchett’s grandmother also lived with the family. After a gap year in Egypt with plans to become a museum curator, Blanchett returned to Australia and, in 1992, graduated from Sydney’s National Institute of Dramatic Art. She quickly set stages alight with her commanding presence. Hollywood beckoned, but it was her arresting, nuanced turn in Elizabeth (1998) that announced her Old Hollywood star power to the world.

She and her husband, playwright Andrew Upton, got married in 1997 after a breakneck romance, and currently live in the UK, where they also run a production company. (His unusual keepsake from her career? The prosthetic elf ears she wore in The Lord of the Rings). One son is still completing school in Australia – “it’s been hard” – but don’t get her started on the societal pressures working mothers face. Her brow furrows, her voice becomes clearer, more strident. “If I get asked one more time how I balance work and having children, when my husband and male actors never get asked that question… We have to stop putting pressure on women that they have to have it all, do it all, or that anyone can have it all. You can’t. You’ll never sleep. But this is not just about women – you have to bring the men along, too. Whenever a man supports a woman by taking paternity leave or sharing child-rearing responsibilities, he’s somehow ‘emasculated.’ Only when that’s seen as a genuine, positive thing for partners to do, will women be freed to enter the workplace guilt-free. You have to remove the guilt and the stigma.” And with that, she turns her mesmerizing gaze straight ahead. Focused. Powerful. Forthright. A woman of – and for – our times.

In Style Us – Scans